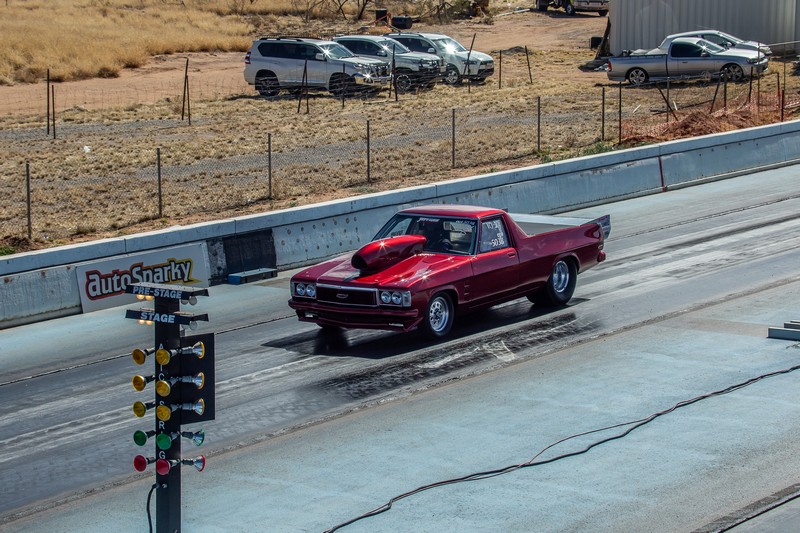 The Summit Racing Equipment Sportsman Series saw old faces and new in the winner’s circle of Alice Springs Inland Dragway as drivers and riders from across Australia claimed victories.

Desmond Jeffree’s Super Sedan win had plenty of emotion attached, as his struggle to even make it to the ‘Northern Swing’ paid off big time with a popular win. Jeffree is well known for helping out many other competitors in the Summit Racing Equipment Sportsman Series, and all were happy to see him take home the trophy.

“We were building a new motor in the two weeks before we were due to head off, but it blew up on the dyno,” he said. “We searched around and found an old 460, with no carbs or anything bolted to it. The thing was leaking fuel and oil in Darwin and we were just trying to kill problems as we found them.”

The Victorian driver continued to work on the car as the team arrived in Alice Springs, where he discovered the engine only had 24 degrees of timing.

“I said to my crew, how funny would it be to take it out with this piece of crap,” he said. “The boys did so many late nights just to even get it here. We packed the grandkids in the motor home for this trip and everything gelled into place.

“We had really solid packages all day today. It might have been the slowest car I have driven in my life, my old Super Street car was faster. I was nearly ready to paint a race number on the motorhome!”

Vlado Turic was not to be stopped in Top Sportsman, as the top qualifier navigated his way through the rounds for his final win against Kevin Mcivor. Turic defeated Leon Davies in round one, who amazingly managed to rebuild his car following a pit area fire at the start of the event.

Modified Bike saw Dean Gunson’s Kawasaki get by Top Qualifier Brusnahan’s Suzuki in a close final round. Gunson booked his spot in the final with victory over Gordon Crawford in the opening round, while Brusnahan had taken victory from Gary Flatt.

In Super Street, WA’s Lisa Garbellini said it was a dream come true to win her second straight Summit Racing Equipment Sportsman Series event, as she backed up her Top End Nationals win from Darwin with victory at the Desert Nationals.

“It was definitely worth the trip, but I don’t think my husband will take me on trips anymore,” she laughed, having once again defeated Paul Garbellini in the semi finals.

“I’m on top of the world and I can’t believe it. To go travelling and win makes it all worth it.”

Lisa took out top qualifier Michael O’Brien in round one. After eliminating her husband in the semi finals, she then faced Michael Bridges in the final. It was a repeat of the Top End Nationals, and the result was the same.

With a bag of points, Lisa said she will contest the two Perth rounds of the Summit Racing Equipment Sportsman Series, which will hopefully give her enough points to reach the cap and head to the ANDRA Grand Finals. For now, there is just the long drive home as she drives back to Western Australia the long way due to the South Australian lockdown.

“My car will go on the truck with Gordon and then I will drive with Paul back up to Katherine, before we can head across to WA. It will take five days to drive home but we will get it done!” she said.

The Summit Racing Equipment Junior Dragster might have been confused with the Top Doorslammer final of the Australian Drag Racing Championship, as the surnames Zappia and Abel battled it out. WA’s Brodie Zappia is the nephew of John Zappia, and he emulated his uncle’s victory with his own win against the NT’s Aidan Abel, son of Matt Abel.

It was an unusual final with Abel’s car experiencing issues, as it barely made it to the staging beams.

“I heard Aidan’s car start up late and I didn’t hear anything in the burnout, so I guessed there was some form of issue with them,” Zappia said.

“As I left the line I looked over and his stage light was still on. He had the handicap advantage but I couldn’t see him out front, so as I came to the finish line I gave it a few taps to run safely over my dial in.”

Zappia said Alice Springs Inland Dragway has been a good track to him, as the site of his first ANDRA Christmas Tree win in 2019.

“We had some challenges in Darwin and what we are running today in Alice Springs is a completely different configuration. We overcame the challenge and got there in the end; the confidence is coming back.”

ANDRA wishes to thank all of the officials and volunteers at Alice Springs Inland Dragway and the dozens of racers from across Australia who braved changing border closures and lockdowns to make the Desert Nationals happen.

“What every racer had to navigate to be here today is incredible, and we can’t say enough about the support everyone has given to make the Desert Nationals a success,” he said.

“The future is always changing but for now we have two rounds in the books and some very happy winners. Congratulations to everybody for just making it to Darwin and Alice Springs – we thank you.”

Also on track at the Desert Nationals was round two of the Australian Drag Racing Championship – for a wrap-up of the ADRC action, please click here.

The next round of the Summit Racing Equipment Sportsman Series is the double-header Rocket Nationals, scheduled for August 28 and 29 at Benaraby Dragway in Queensland. For event information, head to www.benarabydragway.com or www.andra.com.au.