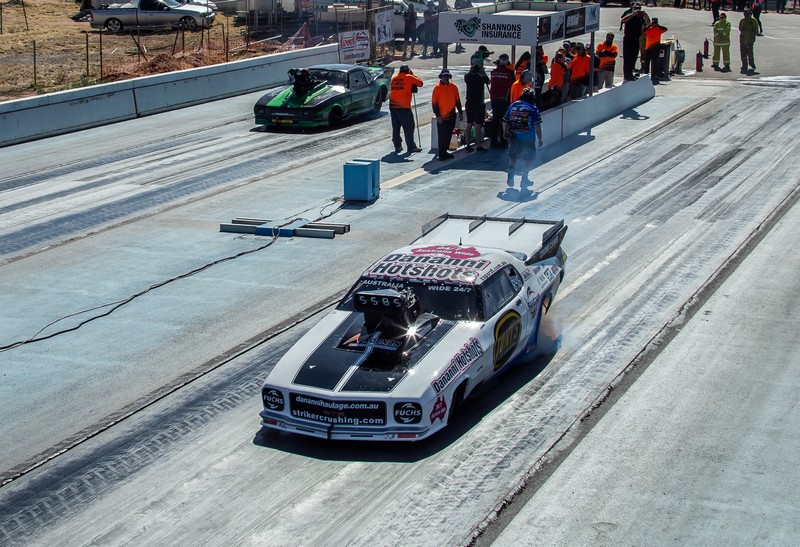 John Zappia has fired back in the Australian Drag Racing Championship with a Desert Nationals win at Alice Springs Inland Dragway on Sunday.

Western Australia’s Zappia defeated the Northern Territory’s Matt Abel in the final round, 5.853 to 5.960, and took over the lead of the Top Doorslammer points.

The day began well for Zappia as he improved on his Saturday times in Sunday’s compulsory qualifying session. He used a 5.847 in the Dananni Hotshots/Tony’s Auto Wreckers Monaro to not only claim the number one position but to also win the Crow Cams Top Qualifier Award presented by Decoglaze Glass Splashbacks.

“We just crept up on it and put a bit more in for the last qualifying run and it all worked,” Zappia said.

“It did everything it was supposed to do and we managed to get that 5.84 that we knew the track could hold.”

The pass set Zappia up for a first round confrontation against his arch rival Daniel Gregorini, in the Scratch & Match Motorsport Camaro.

On the opposite side of the ladder, Abel also survived a spirited challenge as his 5.99 came home over a 6.163 from Kelvin Lyle.

“We put a little bit more in it for the race against Daniel,” Zappia said.

“I ended up having too many revs on the start line and was dragging the clutch and it left with our best 60 foot time of the weekend but I had to pedal and punch second gear early.”

That left only the final against Abel, whose consistent form had Zappia looking over his shoulder.

But from there Zappia clawed back for a 5.853 to 5.960 victory, taking the finish line stripe by just over five hundredths of a second in a thrilling final race for the Alice Springs crowd.

“We had a tiny bit more on the tune-up to keep up with the track and I managed to get it down there without needing to pedal,” Zappia said.

“Matt was right there and it was side by side. It was close enough to where any mistake would have seen Matt take it.”

“We have doubled up a few times with Brodie now and it is always a great feeling through the pit area when we can both bring a win home,” he said.

In the B Final, Gregorini salvaged some points with a 6.038 to 6.086 win against Lyle. Gregorini’s speed of 255.36mph also proved helpful, granting him some extra bonus points.

The Top Doorslammer teams of the Australian Drag Racing Championship will navigate their ways back home, before heading to Adelaide International Raceway for the third round of the series on October 2 and 3.

Also on track today at the Desert Nationals was the Summit Racing Equipment Sportsman Series – for a wrap-up of the SRESS action, please click here.