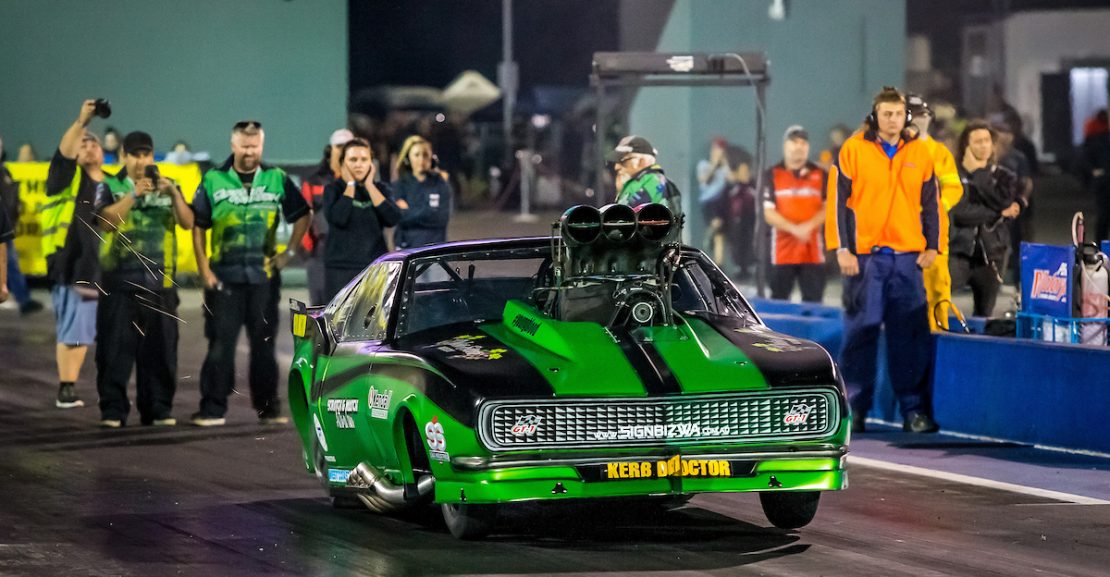 The Perth Motorplex will get 2021 off to a great start with its Nitro Slam event this Saturday, January 2.

The event will be headlined by Nitro Funny Cars and Nitro Front Engine Dragsters, nitro-burning Motorcycles and 10 of the hugely popular Top Doorslammers as they continue their fight for the Summer Slam series.

Amongst the field of Doorslammers will be last round winner Daniel Gregorini. The West Aussie is still on a high after his team was able to claim the December 2 event win after completing a mammoth rebuild at 3.30am on race day, which was necessary due to a heavy crash during the opening Summer Slam round three weeks prior.

“Our goal was to just try and make it back for round two to get some points to stay in the title hunt for at least second place, but the team nailed every aspect of the rebuild process,” Gregorini said.

“To come back after that crash and then win that meeting is something I will never forget.

“To be honest, I did not win that meeting – the crew, helpers, volunteers and supporters that put in all that work over those three weeks did.

“Thank you to everyone who helped and came past to say well done. I’ll be forever grateful.”

While the lead-up to round two was certainly a frenzied one for Gregorini and his crew, the team has thankfully had a less stressful preparation for this weekend’s event.

“Our crew was absolutely exhausted after the lead-up to round two, but between round two and three we have actually had it quite easy,” Gregorini said.

“You see, we didn’t take any short cuts in the rebuild, so besides going over the car thoroughly after round two to make sure every nut and bolt is tight, and a quick look over the driveline, we are all set to go!

“We did have an ECU shifting issue at round two which limited us to only four of the five gears, be we got that sorted and are rearing to go.

“It is really shaping up to being a very close championship, so we are keen to go rounds and keep on closing the points gap on the field as much as we can.”

Gregorini has fond memories associated with the Nitro Slam event, including a record-setting performance at the 2019 instalment.

“The Nitro Slam is a great meeting and has proven to be a fantastic success in the past, so I really urge everyone who is looking for something to do over the Christmas and New Year break to get to the Motorplex with their family for a great show,” he said.

“This time last year at this very meeting, myself and John Zappia ran the fastest side by side pass in Australian Doorslammer history in the finals with a 5.62 (Zappia) v 5.65 (Gregorini) pass. You don’t want to miss out on exciting action like that!”