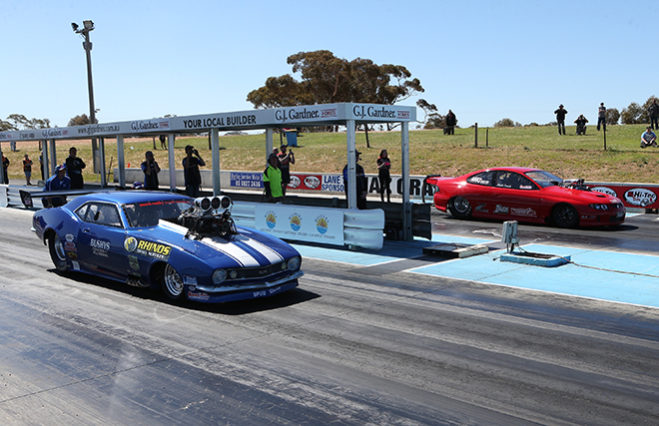 Mark Zauch has won his first ever ANDRA Christmas Tree at Round 3 of the Summit Racing Equipment Sportsman Series in Mildura with a win over Justin Russell in the Supercharged Outlaws final.…

Mark Zauch has won his first ever ANDRA Christmas Tree at Round 3 of the Summit Racing Equipment Sportsman Series in Mildura with a win over Justin Russell in the Supercharged Outlaws final.

The unlikely win was despite a fuel leak between the final two rounds that the team temporarily fixed with a makeshift combination of rags and duct tape.

“I came up here just to get the car down the track,” said Zauch.

“I wasn’t planning on winning, we just wanted to test a few things – I did some maintenance on the car myself so I was a little bit sceptical if it was going to be alright and yeah, we went and pulled this out.

“We had a little fuel leak (before the final) that we didn’t have enough time to weld it up so we duct taped a few rags underneath the tank to soak up the fuel to give it our best shot. I cracked a good reaction time and came out with the trophy.

“I’d like to thank my old man, he drives me around everywhere, pays for all the transport so thank you Dad. And to all the crew for the weekend, Chris, Donna, my brother Chris, Colleen and a special thank you to Dave Baines who has always been on the phone and helped me out where he can. I can’t thank him enough.”

Russell was competing in his second straight final following a runner up in the Desert Nationals at Alice Springs Inland Dragway in July. But his wait will continue, as it was a fairy tale finish for Zauch.

As the 7th placed qualifier, Zauch had the handicap advantage against all his elimination opponents however he would face quicker opponents as a result. He held on in all three rounds defeating Doina Day and Steven Walker before getting the jump with a huge holeshot advantage on the start line to win the final. 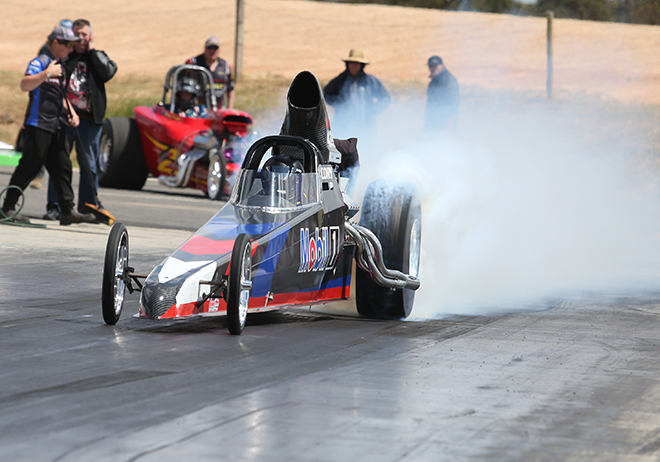 Fortune seems to smile on Cory Dyson at Mildura Sunset Strip as he doubled up to win his second ANDRA Christmas Tree in Modified at the same track he won his first in December 2015.

Last time Matt Forbes red lighted and on this occasion against Jess Turner in the final, Dyson was the beneficiary of a Turner break out. But it was always going to take a stellar effort to beat Dyson and his outstanding consistency at both ends of the race track combining good reaction times and accurate dial ins.

“I had a little issue in the last qualifier yesterday but we got all that fixed up and the car was back to perfect today and we came through with the win, we’re very happy.

“Jess is a very tough opponent so I’ve come up against her a few times now and she’s picked me off a few times so I was trying to give her a really good run for her money. I just tried my best and came up with the goods in the end.

“I’d like to thank my family, my girlfriend Fiona, my crew Aiden, Warrick and my Dad Neil – without them I wouldn’t be to do any of this and wouldn’t have got through the weekend. And my sponsors Mobil 1 and Transcal Fleet Branding Solutions.”

In other news, top qualifier Simon Barlow set a new A/MD 660 foot record with an ET of 4.459 while Leanne Braggs set a new A/MD speed record when she clocked 154.69 mph. 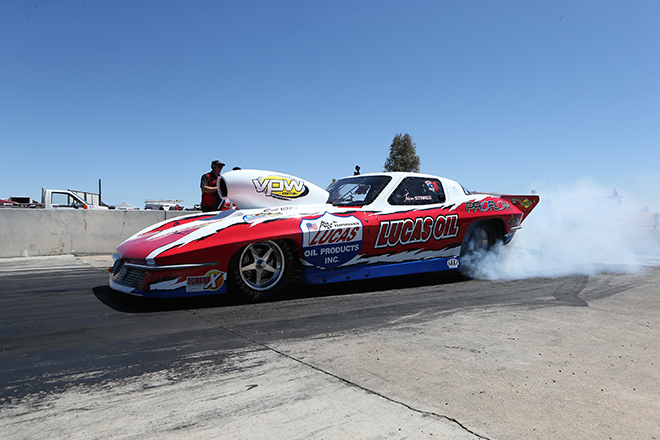 Defending Top Sportsman Champion Jason Stares is now 2:1 in final rounds this season defeating Michael Braggs who was making his debut in the bracket this weekend.

Stares was a late entry to the event and the decision paid dividends qualifying 2nd setting him on another winning path past Graham Hargrave, Jason Arbery and his 2015/2016 Series sparring partner Paul Russo to reach his third consecutive final this season.

“The track was unbelievable and it was an all round awesome weekend.

“It was lucky Michael Braggs turned on the red light before I moved. I still came out with a .010 reaction so we would have given him a good fight at the other end. It was over before it had begun but we’ll take it. I love Mildura, two races, two wins so I’ll be back.

“Thanks to the crew, they are as important as the sponsors. I can’t race the car without these guys; Aaron Brookes, Brett Hore, my three uncles who came along for this one and Tim Reidy for being a legend. And also my sponsors, we couldn’t do what we do without them; VPW, Lucas Oil, Sunoco Race Fuels, Proflow, SunX, Sunset Performance Engines, Flatout Services and a special mention to Brett at ADRP for handling the weekend.” 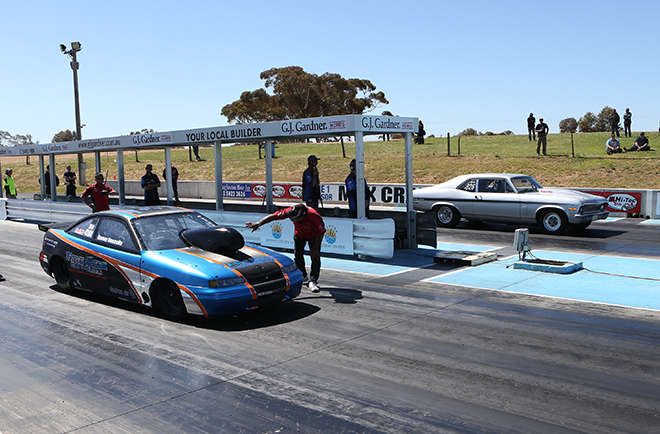 A beaten finalist at the Sunset Strip last season, Danny Buccella made amends to win the biggest field of the weekend in Super Sedan defeating Michael Jennings in the final.

Buccella was able to relax and run the car out the back door to really dial in for the final in a solo semi final following wins over Brandon Freer, Lia Jurkovic and George Tipouikidis. 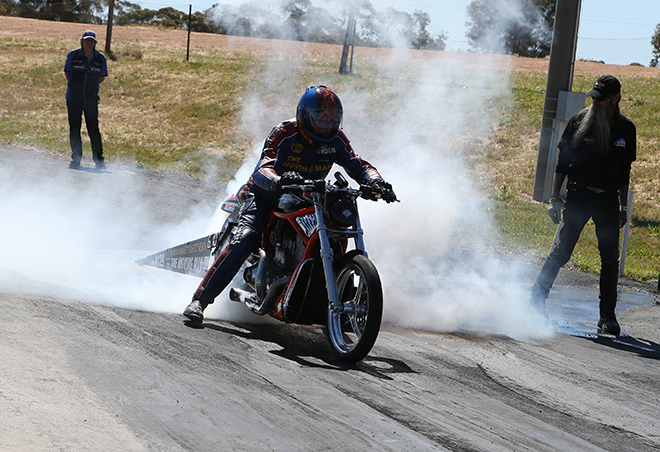 Finn had the advantage with the handicapped start and Crawford needed to react fast to chase him down. A .013 second reaction time from the West Aussie set up the pursuit with Crawford reeling the Champ in who broke out trying to hang on with a 6.894 at 101.67 mph on a 6.93 dial in. Crawford’s superior 6.197 at 102.90 mph on a 6.10 dial in won the day. 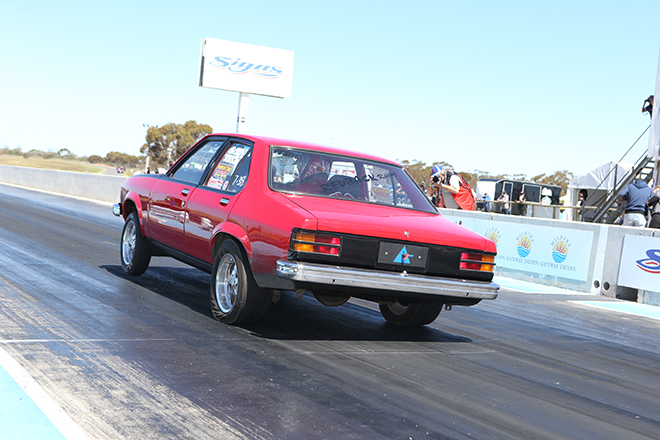 Chris Tatchell secured his second ANDRA Christmas Tree for the calendar year in Super Street following his first ever win at South Coast Raceway in January. Tatchell defeated Michael Bridges, Creagh Stuart and Tony Barbara on route to a bye run into the final.

Tatchell also won the Perfect Light Award for for his .000 reaction time in Round 2.

The battle of the future stars in Summit Racing Equipment Junior Dragster came down to a close all female affair. 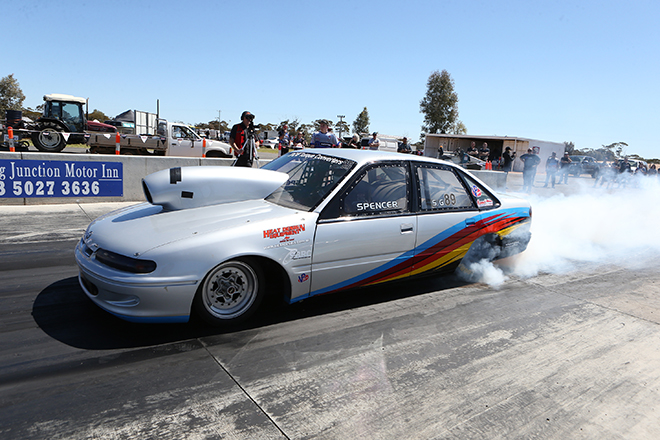 And finally the Super Gas final came down to Champion vs Champion when 2016 Super Gas Champ Darryl Stephen faced off against 2015 Champ Graeme Spencer.

Following a first round bye run, Spencer needed wins over Warren Bull and  Adrian McGrotty to set up the final showdown with Spencer walking away the winner on a double break out.

ANDRA thanks the Sunraysia Drag Racing Association staff, volunteers and sponsors including Mildura Gateway Tavern for an outstanding race track and a great event.

The next round of the Summit Racing Equipment Sportsman Series takes place at the Rowe Memorial Super Stock Classic on November 19 at Calder Park Raceway. For more information please visit www.calderparkdragracing.com.au.