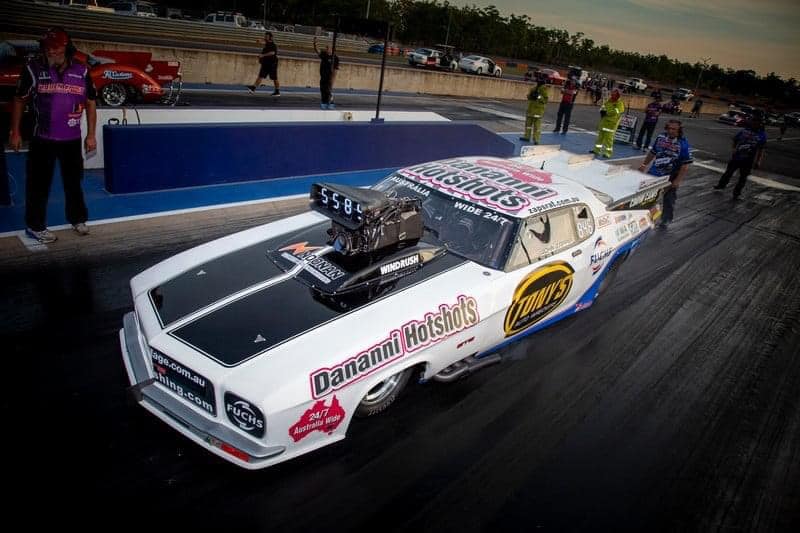 The first round of the new Australian Drag Racing Championship will go down in the what-could-have-been category for John Zappia and his Dananni Hotshots/Tony’s Auto Wreckers Monaro Top Doorslammer.

Zappia’s Top End Nationals weekend began in strong fashion, as he belted out the top qualifying pass in the very first session, a 5.781. The quick run was followed by two more 5.78s to show Zappia had a handle on the changing Hidden Valley Drag Strip track conditions.

“We tried different things and it still came up with a 5.78 every time,” he said.

The only hiccup for the night was when Zappia just barely nudged the Dananni Hotshots/Tony’s Auto Wreckers Monaro into the braking area gravel trap in the final qualifying session.

“At the top end it kept going left towards the wall and I had a quarter of a turn on the steering wheel to keep it off. My left hand was glued to the wheel and I didn’t get the chutes early enough. It was hopping and bouncing through the braking area and I barely put it in the gravel. But there was no maintenance or repairs needed.”

Saturday began with a compulsory qualifying session, where Zappia slowed slightly to a 5.84 – which was still quicker than the competition.

“It was an honour to win the first Crow Cams Top Qualifier Award presented by Decoglaze Glass Splashbacks ever presented in the ADRC,” he said.

The elimination round saw Zappia take on Victoria’s Robin Taylor. Zappia took the lead early and was never halted, but there were problems at the top end with a speed of only 242mph.

“The car launched with a 0.999 60 foot time but it started to rattle further out and needed a pedal. Then at the top end it started to lay over.

“At first I thought there was something going on with the gearbox. Then we looked at the data and realised something was wrong with the number five cylinder. We took a look and saw it had dropped a valve. That meant we had to start changing engines. We were short on crew and weren’t really in a position to do a full change in the time frame we had, but we went for it anyway as much as we could. They waited as long as they could to run the final but in the end it had to go ahead and that was it for us.”

Zappia was disappointed to miss the opportunity to catch an early lead in the ADRC, as fellow finalist Daniel Gregorini claimed the victory.

“We gave it away, we had the quickest car there. But on the upside, it is only the start of the championship and it was a runner-up, so there are plenty more rounds to come.”

The Dananni Hotshots/Tony’s Auto Wreckers team have put a new Noonan motor into the car ahead of the second round of the championship this weekend at Alice Springs Inland Dragway.

Zappia holds the track record of 5.79, which lines up perfectly with what the team have been running in Darwin.

A big thank you to Adrian from Pedders Darwin and Peter Coles for the loan cars and Matt Abel for allowing us to store the transporter on his property for the last month.

“I think Alice Springs will be better than it ever has been this time. It is a different elevation, different humidity, and a different surface. It’s about just reading the track and backing the car down the right amount to get from A to B instead of trying to run a 5.6 there. That said, it’s a flat, smooth track, and there is no reason why we can’t run a 5.6 there depending on how it is prepped and the weather.”

The new ADRC Top Doorslammer series has Zappia excited for what is to come, especially once Australia has COVID back under control.

“We had really good performances by a lot of cars at Darwin, and it can only get better,” he said. “To get a whole team of people and race cars around the country is difficult right now and you have to take it week by week. We will keep moving as best we can to keep the championship alive and as time goes by it will get bigger and bigger.”