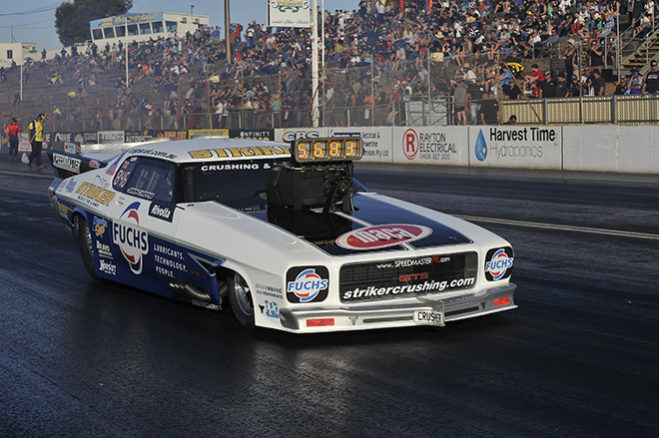 Seven times back-to-back Top Doorslammer Champion John Zappia is on his way to Willowbank Raceway for the biggest drag racing event outside of North America – the 2015 Fuchs Winternationals.…

Seven times back-to-back Top Doorslammer Champion John Zappia is on his way to Willowbank Raceway for the biggest drag racing event outside of North America – the 2015 Fuchs Winternationals.

“We come into the Winters with a large lead in the championship” said Zappia,

“But we have prepared thoroughly just like every other time we race, and we are coming to Willowbank hoping to win if luck goes our way. The Zappia Racing crew is treating this event as any other event and have prepared very well hoping to take out the event and the 8th Championship.”

Zap leads the Championship on 353 points, 136 points ahead of Fabietti, and eighteen Top Doorslammer teams have nominated to compete in this year’s event.

“The competition for qualifying will be intense amongst all the racers. The track is usually killer at Willowbank, and we have great data from last year’s event where we top qualified and won the event. We did seven runs – all between 5.763 and 5.869 with no extra maintenance on the motor, diff or gearboxes.

“A credit to the quality of Fuchs Lubricants and B&J Gearboxes. That happens when all the hundreds of small elements in the car are right, the ratios, the tune and the driving is right. I think we may see some surprises this year, as a few new Top Doorslammer racers make their mark.

“We hope to win the Winternationals for both our co-naming rights sponsors, Fuchs Lubricants and Striker Crushing and Screening, who have been with us throughout this run of seven straight championships.”

The Fuchs/Striker Crushing Monaro will be on display Wednesday 3 June 2015 for a meet and greet at the Burson Auto Parts Booval store, 196 Brisbane Road, at 4.00pm to 6.00pm.

“Craig Pedley and Striker have been great sponsors for Zappia Racing over the years and we feel sad that due to the mining downturn they will not be with us for the 2016 season as co-naming rights sponsors. We will be hoping to attract a new sponsor for the start of Round 1 in Darwin on the 17-18th July 2015 to join Fuchs as a co-naming rights sponsor for the 2015/2016 season. The show must go on, and we want to reach our goal of ten championship wins,”

“Being the championship leader puts added pressure on the team, not from within our own camp but from other people within the drag racing community who are sceptical of our achievements. We spend many hours testing and racing in local events and have data for over 600 runs.

“There are lots of comments and innuendo being pointed at us about our performance levels, and that’s only natural – human nature so to speak. Our HQ Monaro is the most scrutinised Top Doorslammer in the field as we get scrutinised by ANDRA every time we top qualify or win a meeting. They check engine capacity, overdrive ratios, computer downloads, fuel and total car weight. We invite their inspections as we race to the rules and let our results do the talking.

“The advances teams worldwide are getting are not in the electronics. It’s just plain old engineering, and being bold enough to try something different. Top Alcohol has been even in performance for years, and then all of a sudden teams are going really quick – setting world records. We have been doing that more gradually over the years – little gains here and there. Hopefully we will continue to make advances at the Willowbank track and have a successful meeting.

“We will also be paying Noonan Engineering a visit during the trip. We have just fitted their new super lightweight Hemi rocker covers on the car to match their heads we run. Noonan’s Engineering products are being recognised worldwide and we are happy with the success we are having with their quality products.”