Zappia bounces back to claim victory at Hidden Valley

Zappia bounces back to claim victory at Hidden Valley 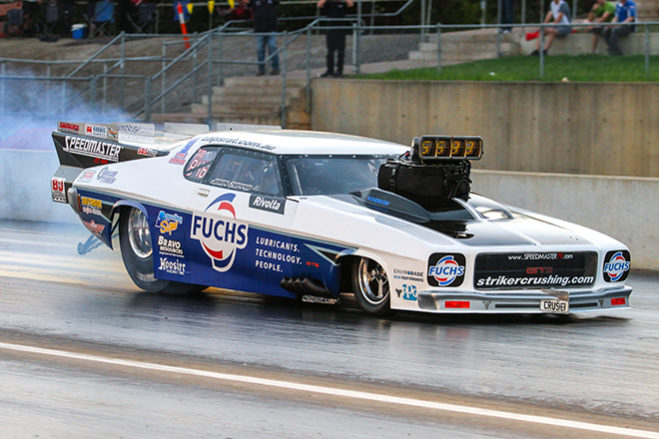 John Zappia bounced back from his Round 1 disappointment to take the points in Round 2 of the ANDRA Drag Racing Series for Top Doorslammer at the 2015 NT Titles in Darwin.…

John Zappia bounced back from his Round 1 disappointment to take the points in Round 2 of the ANDRA Drag Racing Series for Top Doorslammer at the 2015 NT Titles in Darwin.

Old rivals Zappia and Peter Kapiris squared off in a fitting finale to another first class event at Hidden Valley Drag Strip defying the warm Territory conditions in the quickest side by side pass of the night.

Kapiris had the speed and the reaction time advantage at the start line but Zappia crossed the stripe first on the quickest pass of the weekend with a 5.786 elapsed time at 250.74 mph to defeat a 5.897 ET at 253.71 mph.

“We worked our arses off and the team of the Fuchs Monaro did a fantastic job all weekend,” said a relieved Zappia.

“We were a little bit slow, missed the second qualifier but it doesn’t matter now, it all came together. We saved the best for last and this one is for Noelene, she was with us.

“It was a fantastic weekend, we love racing here. It’s the best race track and definitely the best return road in the history of Australian drag racing – V8 Supercars race on our return road that’s how good it is.

“Thanks to all the sponsors; Fuchs Lubricants, Taylor Tyres, Striker, Windrush, Bravo Resources, Hoosier Tyres – they just work so well. We put new ones on this weekend, it actually slowed us down but we just wanted to stay off the walls.

“The track preparation was fantastic this weekend, they kept it really consistent. I nearly made it without pedalling (in the final) but I gave it a sympathy pedal just then, I probably didn’t need to do it but I did it.”

Also banking points this weekend in the Non-Qualifier Shootout were Pino Priolo and Murray O’Connor with consecutive wins over Rob Taylor and Daniel Gregorini.

The luck of the draw threw up identical pairings in each round with Priolo and O’Connor receiving 40 points for their efforts while Taylor and Gregorini each receive 30 points.

The NT Titles complete a highly successful swing through the Northern Territory encompassing Top Doorslammer and Top Alcohol at Hidden Valley Drag Strip the past two months in addition to the Summit Racing Equipment Sportsman Series opener in Alice Springs.

The next round of Top Doorslammer is currently scheduled for the Springnationals at Adelaide International Raceway October 17-18.