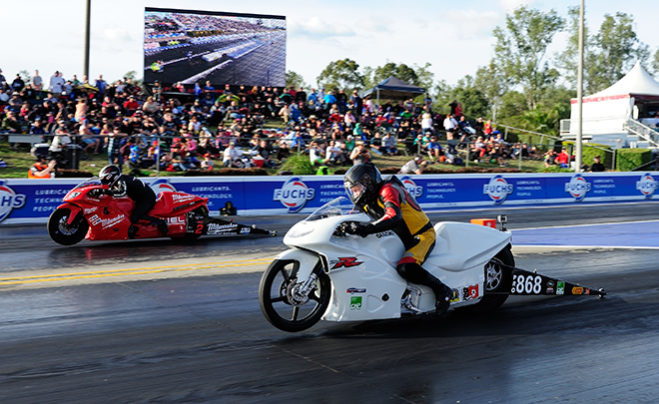 For Pro Stock Motorcycle racer Scott White, he is all too aware that the best-laid plans can sometimes take unexpected turns.…

For Pro Stock Motorcycle racer Scott White, he is all too aware that the best-laid plans can sometimes take unexpected turns.

Following a disappointing last couple of rounds at Calder and Sydney, White was primed and pumped for the Winternationals. He’d racked up too many miles driving from Sydney to Adelaide, back to Sydney, then off to Brisbane, to not do well.

“The main engine was rebuilt with the talented Jim Hanlon, so I was really looking forward to giving it a workout at Willowbank. I had everything crossed that the weather would be dry because I really love racing at the Winternationals and I love the atmosphere,” said White

“The sun was out and the crowds turned up on Saturday and Sunday. It was good for the sport and for the racers. The two commentators Chad Neylon and Bennie Bishop did an awesome job keeping the crowd entertained and up to date.

“It was a little bit on the warm side, “ said White, but I’ll take that any day over the rain that has affected the event over the past few years.

“The motor we put together worked perfectly with plenty of horsepower on tap. It ran a 7.37 best at 181 mph, and a new PB on the 60-foot clocks with a 1.102 certainly put a smile on my face.

“So the motor was working really well and we are getting on top of the information and learning more and more. We had a bit of an issue towards the end and this played a big part in eliminations. The revs were going sideways after the launch when the two-step was sticking on for some reason,” said White.

“The run against Maurice (Allen) in round two had the two-step on for half a second, so I can only wonder what the bike would have run had it taken off normally. The motor was sounding crisp and has come away with no damage. Its very effective and we are very pleased with the results and outcome.

“The next step is to get the big engine built and having that 7.37 spare should put us in a strong position. Hopefully we can have the bigger cube engine finished in time for the next round in Adelaide.

“I’d like to thank my hard working crew Paul Grey and David Finn as we’ve really worked these last few rounds with multiple engine swaps and body repairs after Sydney’s bumps. Jim Hanlon from Superbike Performance put in a huge effort to help me finish the motor and Trevor Birrell helped with issues by phone as it was the first Winters he didn’t attend since 1990. TFA Fabrication also contributed and we are happy to display their logo. Motorsports NT assisted with some travel costs of which we have many so we are grateful for that monetary support. We are on the lookout for some solid financial support and I recommend going to our website www.scottwhite868.com to gain some good exposure for your product or service.

“It sure was worth going to the Winters as it’s the first time we made it to the semis at that event and I’ll say it again – one day I’m going to get one of those gold trees,” concluded White.