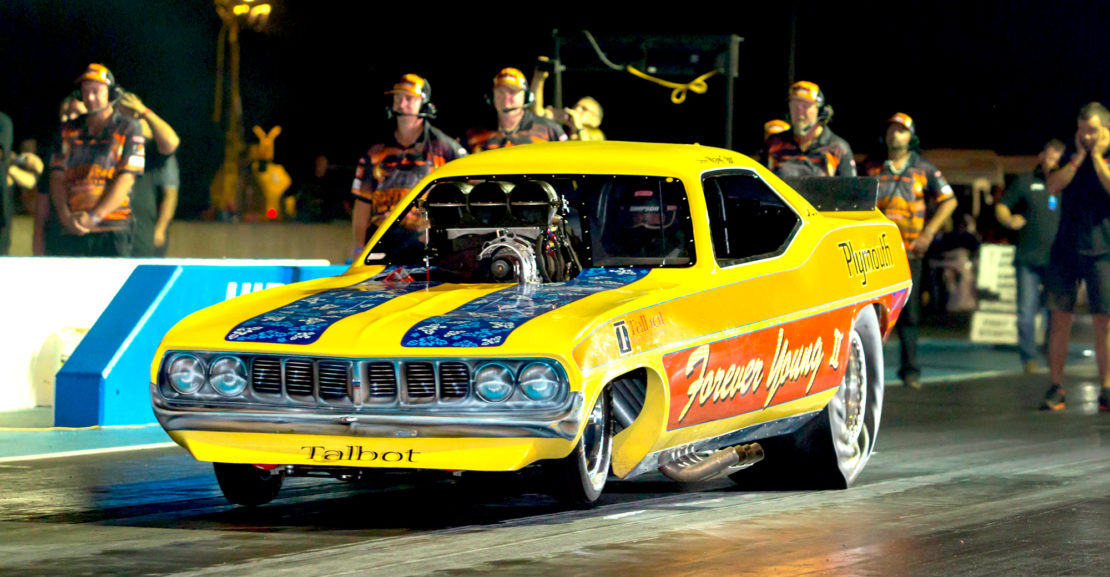 photo by Jeremy Horvath This weekend at the 4th running of the Desert Nationals, Victorian Wayne Talbot is looking to smash both ends of the ANDRA AA/MA national records out the park.…

This weekend at the 4th running of the Desert Nationals, Victorian Wayne Talbot is looking to smash both ends of the ANDRA AA/MA national records out the park.

Talbot has had his eyes on the prize for a while now. Earlier this year he was attempting to reset the record at South Coast Raceway. He then entered his nostalgia Plymouth Cuda in Top Alcohol and had a play with the big boys at the Australian Nationals and the Grand Finals.

Talbot had pre-entered the Nitro Up North event for another play with the Alky racers however that didn’t happen so he ended up match racing the Outlaw Nitro Funny Car of Nathan Coles. Talbot recorded a 6.411 at 243.06 mph and then went 6.187 at 243.77 mph.

“If we can emulate what we just did in Darwin we will certainly smash both ends of the record,” said Talbot. “It’s just a matter of the track and if it can hold the power I guess.

“We actually took a lot of power out and took off in second gear because we were smoking the tyres. I’ve got a torque converter sitting under my desk, which I’ll be bringing the Alice with me. This is my last hooray in this car so it would be great to go out with a bang.”

“We will park this car up and go Top Alcohol. Another reason we went over was to pick up another car. We’ve purchased the Mustang Funny Car from Scott MacLean. I actually wanted to buy it turn-key, but Scott wanted to keep the driveline.

“As for the Cuda, my brother is going to have a drive. We’ll detune it a fair bit and run it in Outlaws.

When: July 29-30, 2017
Where: Alice Springs Inland Dragway
What: The Desert Nationals features Rd 2 of the Summit Racing Equipment Sportsman Series. The Lamattina Top Fuel dragster is set to rock Alice Springs with Australia’s quickest and fastest female – Kelly Bettes behind the wheel. And if that’s not enough, Top Doorslammer will be making spectacular runs over the two days.