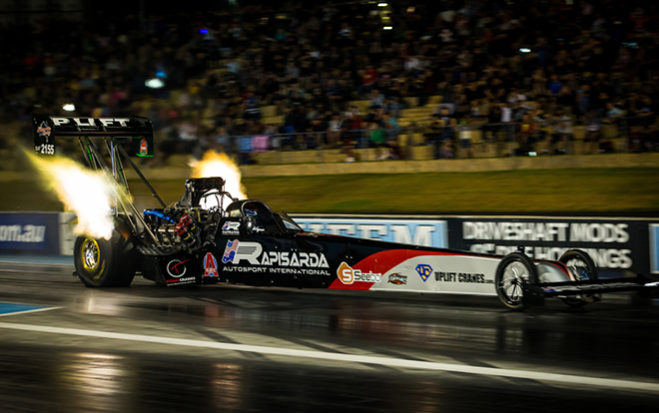 Wayne Newby, the newest recruit to Rapisarda Autosport International, says he is growing more and more accustomed to the cockpit of a Top Fuel dragster but even he was taken aback after covering the quarter mile in 4.58 seconds at Perth Motorplex last month.…

Wayne Newby, the newest recruit to Rapisarda Autosport International, says he is growing more and more accustomed to the cockpit of a Top Fuel dragster but even he was taken aback after covering the quarter mile in 4.58 seconds at Perth Motorplex last month.

That run catapulted the Top Fuel rookie straight to the top of the qualifying chart in his first competitive pass for the year while also representing a career best for the Sydney-sider who has spent 20 years competing in Top Alcohol.

“I’m getting more and more comfortable in the car with each lap but still have a lot to learn about how the fuel car reacts,” said Newby.

“Top Alcohol is a great stepping stone for Top Fuel but even with 20 years of driving Top Alcohol, the 4.58 run is on another level I had to get my head around.”

The upcoming Santo’s Super 3 Extreme Drag Race presented by Uplift Cranes and Titan Cranes on Easter Saturday is a special event for the Rapisarda team as it celebrates the life of Louie Rapisarda, son of team owner Santo.

Allan Dobson brought home the Louie Rapisarda Memorial Trophy for earning the most points over the previously held two-day event in 2014.

With Newby taking the seat from the semi retired Dobson and Damien Harris currently leading the Top Fuel title race, RAI hope to retain the crown and take a leap toward lifting the ANDRA Top Fuel championship with a third consecutive team victory this season.

“I think we had the better car at Perth but had silly issues that let us down in eliminations,” adds Newby. “Santino (Rapisarda) and I are looking forward to the Super 3 so we can close that point gap.

“Santo (Snr) and his whole family give their all to the sport of Top Fuel and I think the dedication that Santino and Santo Jr have, that (future) championships are looking good for Rapisarda Racing.”

While the team chases the title locally, they will launch a dual assault across the pond in Las Vegas in the SummitRacing.com NHRA Nationals just one week following the Super 3.

The team then plans to return once again in September for the U.S. Nationals with internal discussions involving Newby at the wheel, if not in Indianapolis then potentially sometime in the future.

“Dom Lagana will pilot the RAI car in Vegas, the car is the same as it was when it went 3.76 at Pomona,” explains Santo Rapisarda Jr.

“We will continue with a 5 disc clutch for now but are accumulating the bits to switch to a 6 disc before Indy.

“There has been talk of Newby getting the same opportunity (in the future) that Dad has given others in the past.”

The Santo’s Super 3 Extreme Drag Race Event will be a one-day Easter Saturday spectacular with Round 3 of the ANDRA Drag Racing Series for Top Fuel and Top Alcohol set to headline an action-packed four and a half hour ‘short and sharp’ show.