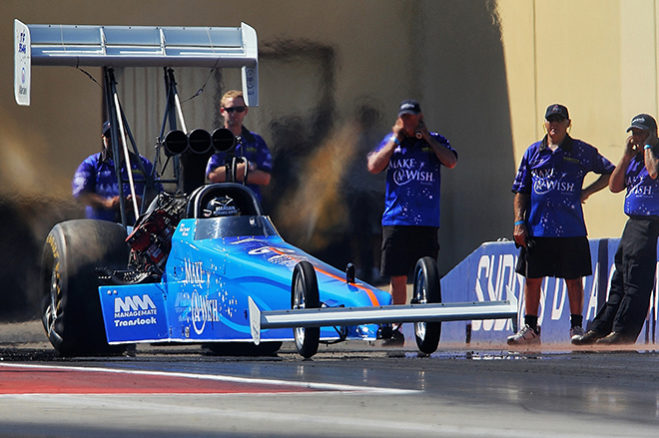 Mariani Motorsports is pleased to announce that they have secured the services of American tuning ace Michael Domagala for the  upcoming East Coast Nationals at Sydney Dragway.…

Mariani Motorsports is pleased to announce that they have secured the services of American tuning ace Michael Domagala for the  upcoming East Coast Nationals at Sydney Dragway.

Domagala joins the team as it enjoys a huge upswing in fan support following an increased partnership with Make-A-Wish Australia and a very public launch of the new team livery earlier this year at Sydney’s Meguiars Motor-Ex.

With a wealth of tuning experience, Domagala joins the team after stints with such drag racing Luminaries as Chuck Etchells, Melanie Troxel, the “King of Speed” Kenny Bernstein and Antron Brown in the USA, but the New York State born racer has also enjoyed considerable success in Australia with the Lamattina Family.

Domagala’s addition to Mariani Motorsport is not just limited to his tuning experience – he is also bringing another bullet for the Mariani arsenal in the form of a new engine with all the latest technology from the states.

“I am really looking forward to working with Michael and seeing him work alongside Mario and the whole team. I’ve been impressed with his professionalism in the past when we have raced against him,  and I truly think that we will be able to contend for wins, starting in Sydney at the East Coast Nationals”, said driver Mark Mariani this week.

“Dad has been buying parts from Michael for a while and when we suggested that we should get him over here, a few phone calls were made, and we just can’t wait to introduce him as part of our team” .

Archer has been involved with Top Fuel for well over twenty years and has experience on both sides of the pacific with stints in championship winning teams in Australia, and also racing in the NHRA in the past.

Mariani Motorsports is competing in the Top Fuel class at the the East Coast Nationals, at Sydney Dragway from 7-8 November.

For ticketing and further information on the East Coast Nationals at Sydney Dragway, please visit www.sydneydragway.com.au