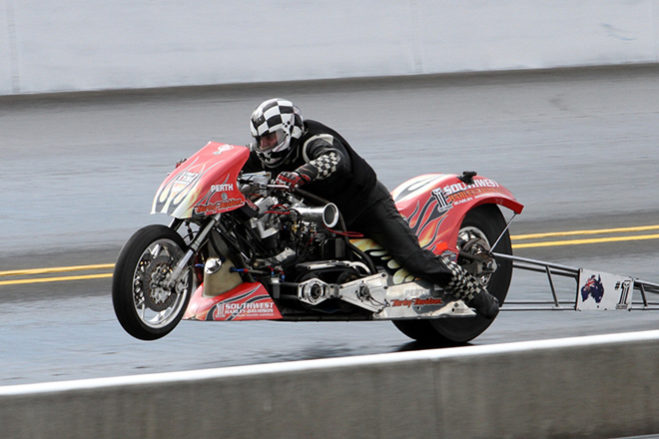 Mark Drew was already firming as a favourite for the 2014 ANDRA Drag Racing Series Top Fuel Motorcycle championship when the 2014 Fuchs Winternationals rolled around.…

Mark Drew was already firming as a favourite for the 2014 ANDRA Drag Racing Series Top Fuel Motorcycle championship when the 2014 Fuchs Winternationals rolled around.

That was the event he debuted his former Doug Horne owned 6.2-second Nitro Harley, thrilling the crowd with his near full quarter mile passes on the back wheel running high 6.3 second passes.

Drew went on to claim his maiden championship in emphatic fashion and heading into the short 2015 ANDRA Championship season it was hard to see anyone catching him – an even more impressive prospect given the calibre of challengers such as Chris Matheson and Chris Porter.

Few would bet against Drew taking a third title come June 2016 but with eight rounds to come over the next 12 months, a three-peat is far from automatic and the down to earth West Aussie is more focussed on reading weather conditions.

“I spend a lot of time and have a good maintenance schedule on the bike. You wont often see it not get to the end of the track. Maybe I might be a little way off the right tune up, quite often I’m conservative on the tune up and could probably go a little harder.

“I’m hoping during and after this season I can master weather and track conditions a little better and run a bit closer to the edge. Hence, go faster more consistently.”

If the opportunity for the “right tune up” comes, Drew hopes to lay down a 6.2-second pass and claim yet another Twin Cylinder record. At the Fuchs Winternationals he considered chasing a 6.2 in the final but instead chose to focus on the ANDRA Gold Christmas Tree.

“I was very happy when we were in a position where we had the championship in the bag, I then thought about putting more power into the bike and chasing my 6.20,” explains Drew.

“I spoke on the phone to my mate and head crew man, Cracker who couldn’t make it due to work commitments. He suggested keeping it safe and taking out the meeting, waiting till we run in Perth at non-championship meets and turn things up a bit. Plus the fact I had two of my beautiful children, my daughter Ava and my boy Torin there for the first time helping and watching, the Gold Christmas Tree sounded like a good option.

“Thanks to Perth Harley Davidson, Southwest Harley Davidson, Stan’s Tyre Service, A & J Drilling and BAZ National for getting my bike there. Also Andrew, Cracker, Brendan, my pit crew, nothing is possible without the sponsorship and help at the track.”

The first round of the 2015/16 ANDRA Drag Racing Series Top Fuel Motorcycle championship will take place October 17-18 at the Springnationals in Adelaide.