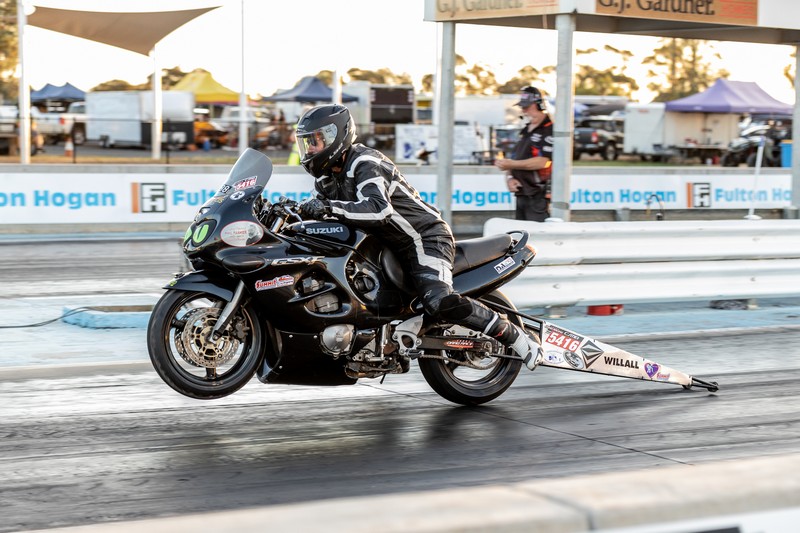 With the Twilight Nationals at Mildura’s Sunset Strip now successfully run and won, the stage is officially set for what is sure to be an epic final battle for championship glory at the upcoming ANDRA Grand Finals event in Perth.

This weekend’s event was the penultimate round for the 2021/2022 Summit Racing Equipment Sportsman Series season, with the SRESS racers now preparing to head to Perth in just a few weeks’ time to join the Australian Drag Racing Championship (ADRC) for the April 8-9 event at the Perth Motorplex, which will also feature a round of the Burson Auto Parts Australian Top Fuel Championship.

In Supercharged Outlaws, Vince Monteleone assured his place in the final by taking victories from Mark Hunt (round one) and Decoglaze Glass Splashbacks Top Qualifier Medallion winner Tim Stewart, while David Thornton – who wasn’t even planning to race at this event until the last minute – had taken on and defeated Shaun Kerkman before benefiting from a bye run in the semi-final. It was an exciting final run between the pair, with Thornton taking out the victory after a hard-fought pass for both competitors.

“I am very excited! I have been struggling with the car a bit lately since the new engine was built and we have been having trouble getting it down the track. Finally, we had some talks to some very clever people and they pointed us in a direction I probably wouldn’t have thought about and we finally managed to get down the track a bit without shaking and then yeah, here we are – we had to work hard for it for sure, but we got it done!” Thornton enthused.

“I wasn’t even coming to this event, so to be here with the win is incredible. If it wasn’t for Steve with The Stang organising some wheels and tyres for me from Melbourne and crating a converter to and from, I wouldn’t have even been here. So, a big thanks to them, and to all of my crew for working really hard when we weren’t achieving much – we have certainly turned it around now!

“It has been a good weekend; Tim always does a great job running the events here. Thank you to all the staff and crew here, they have all done an excellent job backing up from last weekend.”

In Modified, Matt Ponton and Pete O’Connell did battle in the final with Ponton taking out the win after a great run in the final. O’Connell had earlier dispatched the Top Qualifier Kenny Stewart in the first round before taking a bye in the second round, while Ponton had emerged victorious from matchups against Kris Wilson and Jodie Wagner.

“This is absolutely awesome and well overdue,” Ponton grinned.

“My missus and I are here flying solo. The wife (Sally) absolutely went above and beyond to get the car ready, and I just can’t thank her enough!

“It still hasn’t sunk in yet that we have actually got the win and the ANDRA Christmas Tree. This is so well overdue – we have been racing for around 15 years and before tonight, had never got a ANDRA Christmas Tree. My kid got one before I did, and man have I been hearing about it, but now they’ve got nothing!” he laughed.

“Thank you also to Kenny Stewart and Amanda for helping us out as it was only the two of us, to the officials here, and to my sponsors Hell Bent Fabrications and CBH Air Conditioning and Electrical.”

In Super Comp, Adrian Vella ran through for the victory from a red-lighting top qualifier Craig Geddes. Geddes had earlier dispatched Louis Svingos in the opening round before enjoying a bye in his semi, while Vella had taken on David Roberts (round one) and Matt Forbes to earn his place in the final.

“We are absolutely rapt. I couldn’t have done this without my crew – Paul, Hayley and Sean – they do a lot of work to get this car where it is. Thanks also to Craig Geddes for giving me a lifter after we hurt one earlier on in the meeting,” Vella said.

“We started off with a few things not working for us yesterday and then we had the one qualifier today, but we got there, and it has been good. I would like to thank all my sponsors, Gold Class Towing, Ridgeway Motorsports, Pro Trans, Comp Engines, TM Line Boring and Engineering, Race Parts Melbourne, Lucas Oils, Outlaw Images, Plucka’s Race Craft and JC Race Stuff.”

In Top Sportsman, Stuart McBain turned his Top Qualifying performance into a finals berth thanks to a bye in the opening round and a victory over Kevin McIvor but it wasn’t enough with his finals opponent Vlado Turic taking out the event victory following earlier wins from Nicole Theo and Alby Bakranich.

“Yesterday wasn’t that good as we had a lot of electrical problems and starter motor problems, so we only got one run in on the first day and then were here going through the car until two in the morning,” Turic explained.

“We got it sorted out this morning though and got one more qualifier done, and from there everything went well.

“It feels really good to get this win, it is a big weight off my shoulders after all the headaches. Before tonight I didn’t think we would be getting anywhere, especially ahead of Perth, so this feels really good.

“I would like to thank Steve from ASAP Electrical, Mark from Huntsman Racing, Roger for helping me this weekend, Dave Baines Race Engines, Michael De Rose from Salisbury Mechanical, and my son and crew chief Tommy who has always been there for me.”

In Summit Racing Equipment Junior Dragster, Top Qualifier Brodie Zappia went all the way to the final to take the win, taking on Sarah Osborne in a great match-up that went all the way to the line. Zappia had earlier emerged victorious from battles against Sophia Kuchel (round one) and Todd Wagner (round three) with a bye in round two, while Osborne had successfully taken on Nathaniel Kuchel and Cooper Plummer before enjoying her own bye run in the semi-final.

Super Street Top Qualifier Tex Griffiths took it all the way to take the event victory, booking himself a place in the final with wins over Julian Semmler (round one) and Rocky Caminiti (round three) with a bye in round two, while his rival Paul Jennings had faced off against Domenic Lanciana, Dutchy Holland and Deb O’Connell on his way to the final stand of the event.

In Super Gas, it was a popular final match-up between Colin Griffin and Graeme Spencer. Griffin had taken on Warren Bull and Top Qualifier Rob Bergiman on his way to the end game, but Spencer had a bit more in the tank in the final and took out the victory after having snatched an opening round win from Jason Wilson ahead of a bye in the semi.

In Super Sedan, Lance Larcombe and Graeme Cooper went all the way to the final, with the ‘Brickie’ ultimately taking out the big trophy. Larcombe had earlier defeated Vince Arena (round one), Michael Rouhan, Chris Farrugia and Benny Phillips while Cooper and his ’The Bricklayer’ station wagon had triumphed over Mick Piscioneri, Rob Evans and Charles Pitt ahead of a semi-final bye.

On two-wheels, the Modified Bike and Competition Bike categories were run with a three-round shootout format.

For results from today’s action at the Sunset Strip, please click here

The final rounds of the season for both the Summit Racing Equipment Sportsman Series and the Australian Drag Racing Championship will be held across April 8-9 at the Perth Motorplex. For event information, go to www.motorplex.com.au