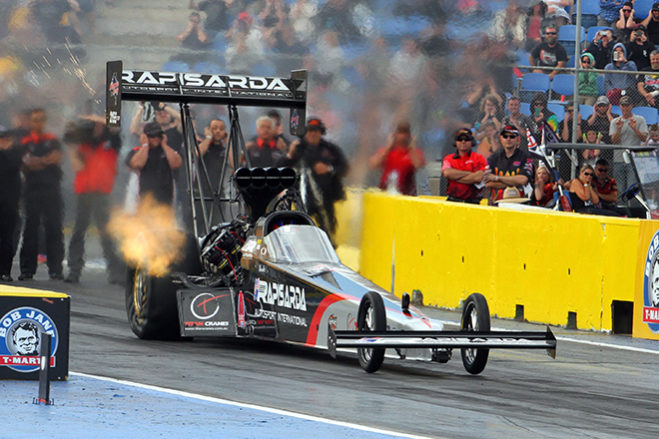 The very foundation of Adelaide International Raceway will be rocked to its core this weekend when Rapisarda Autosport International’s Wayne Newby takes on four-time ANDRA Top Fuel Champion Darren Morgan this weekend.…

The very foundation of Adelaide International Raceway will be rocked to its core this weekend when Rapisarda Autosport International’s Wayne Newby takes on four-time ANDRA Top Fuel Champion Darren Morgan this weekend.

As part of the ANDRA Championship Grand Final April 9-10, Newby and Morgan will match race for bragging rights as they entertain the crowd with flame throwing passes at breakneck speeds.

The match races will take place over the 1000-feet race distance as opposed to the regular quarter mile. But with two of Australia’s premier Top Fuel race teams, battling it out it won’t be any less explosive for an Adelaide crowd starved of Top Fuel action since 2014.

“Well the team and I are on a bit of a high after the success we had at the Santo Super 3,” said Newby.

“We are looking forward to coming down to AIR and to put on a show for the SA crowd.

“It’s an awesome track for the spectators and if you’re standing on the start line you’re right beside these cars and really get to feel the power of these beasts.

“I’m glad were racing Darren, he has a great team and he is one passionate racer so I hope that both the Rapisarda Autosport International and AEG Powertools teams can put on a great show.”

The Grand Final will also stream live from 9am Australian Central Standard Time on Sunday April 10 completely FREE and available in ALL locations including South Australia.

Just log onto ANDRA.com.au and visit the Live Stream page at the homepage on April 10 to watch on your computer, smartphone, tablet or smart TV.