Can anyone stop Gary Phillips? The 16-times Top Alcohol Champion continued his ominous form during qualifying at Hidden Valley Drag Strip tonight laying down a 5.468 second pass at 264.34 mph right out of the gate.…

Can anyone stop Gary Phillips? The 16-times Top Alcohol Champion continued his ominous form during qualifying at Hidden Valley Drag Strip tonight laying down a 5.468 second pass at 264.34 mph right out of the gate.

When the time flashed on the timing boards, even Phillips’ own team were not expecting to go under the Hidden Valley track record by two tenths given the humid Darwin conditions.

“It’s qualifying, tomorrow is race day, today you can throw everything at it, there’s points for low ET and top speed,” said Phillips.

“The Government has spent a lot of money on this track and we wanted to really go for it. Dave Hunter who preps the track at Willowbank Raceway joked with us about running a 5.40 and we did it.

“The car looks good engine-wise. That second run it picked up in the first 60 feet but when the tyres shook I pushed both buttons together. I thought about getting off the pedal but it was like, whatever.”

Once Phillips added a 5.618 in the second session he chose to park the car for the night and save his engine for eliminations tomorrow. Steven Ham qualified second and Jon Sting showed his Fuchs Winternationals win was no fluke by taking third from Steve MacLean, John Cannuli, Debbie O’Rourke and Nathan Coles. 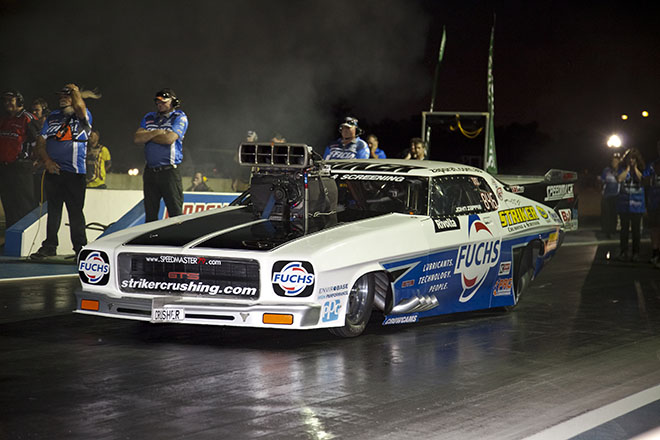 Like Phillips, John Zappia maintained his dominance in Top Doorslammer and looks odds on to win his third Championship round needing only two passes of 5.978 and 5.917 to lead the field even before an oil down put an end to proceedings and chalking off his third run.

It didn’t matter however as Zappia was to be the final pass of the session and it looks like a tough ask to catch him.

“The conditions are a bit tricky here,” said Zappia. “The times we are doing people should be catching us. Kapiris has run 5.80s here; Matt Abel has run 5.86 so it’s only a matter of getting their cars to find the track.

“At the moment we’re going good. I pedalled it in both runs; short shifted and did a couple of little things wrong. We’re still in a good position, we’ve got the number eight qualifier tomorrow so we don’t need to push our limits more than we need to.”

Local Northern Territorian Matt Abel was Zappia’s closest rival qualifying second with a 6.018 from Stuart Bishop, a charging Daniel Gregorini who only made it into the eight car field on his last pass, Peter Kapiris, Pino Priolo, Marty Dack and Grant O’Rourke who will take on Zappia in Round 1 tomorrow for the umpteenth time this year. 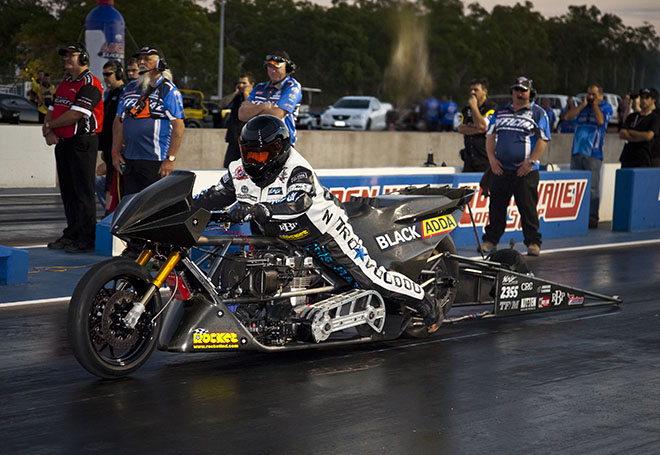 As expected Chris Matheson and Mark Drew dominated the Top Fuel Motorcycle standings in a duel for top spot with both going into the 6.60s early on.

On his new Harley recently purchased from the US, Mark Drew went 10 mph over the National Top Fuel Harley record reaching a scintillating 235.35 mph in his second qualifier. Drew would have qualified first however he collected the timing blocks at the finish line on his third qualifier allowing Matheson to take the number one on a 6.628 from Drew’s 6.684.

“The first run we had a clutch malfunction,” said Matheson. “That ended up being the top qualifier but it was lazy off the line. The second pass we smoked the tyre.

“We didn’t go out for the third qualifier because we damaged the motor on that second attempt and we put another one in. But we live to fight another day.

The high-octane action at the Valley steps up a notch on Saturday July 12 with a number of marquee match ups and Championship points up for grabs from 6pm Australian Standard Central Time.