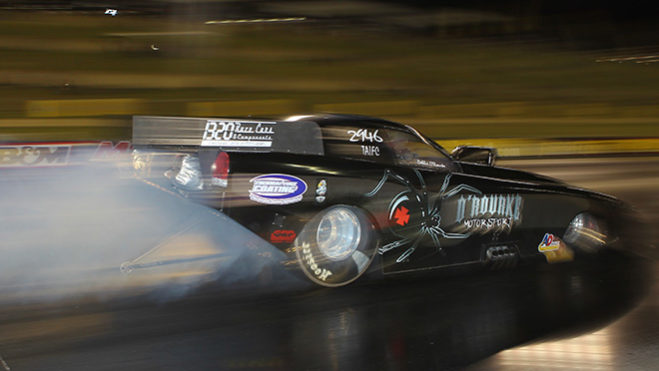 Debbie and Grant O’Rourke are ready to tackle the prestigious 44th Westernationals at the Perth Motorplex this weekend (30-31 January), following a strenuous day of testing at their original ‘home track’ Wednesday.…

Debbie and Grant O’Rourke are ready to tackle the prestigious 44th Westernationals at the Perth Motorplex this weekend (30-31 January), following a strenuous day of testing at their original ‘home track’ Wednesday.

While this is the second event of the year at the West Australian venue for the ex-pats following the season-opening January 9 event in which Grant competed in the Top Doorslammer category, it will be the first competitive outing of the year for Debbie.

“I have a new fuel and clutch combination in my car and am competing in my first event of the year this weekend, so we took the opportunity to complete some testing on-track yesterday,” said Debbie.

“Very hot conditions, data logger issues and the discovery of a broken diff stud after our first pass meant that we weren’t able to do as much on-track as we would have liked, but that first pass was promising and we were able to take our time completely rebuilding the diff for the event which sees us set up well for this weekend.

“We will have 11 cars competing in the Top Alcohol field this weekend including the Craig Glassby/Greg Gower combination that laid down a track record-equalling 5.469 second pass at the last event on their way to victory, so it is going to be a tough one.

“Despite that, we are hopeful that we can get out there and try our luck for the first Gold Christmas Tree Trophy of the season – I know both Grant and I would love to bring one home each to Brisbane!”

Aside from testing complications, the team also had to revaluate their travel arrangements this week – with a burst ear drum for Grant seeing the husband and wife team driving across the Nullarbor from their Brisbane home.

“While I have been given the all clear to drive by the doctors despite my old surfer’s ears, I wasn’t able to fly due to the air pressure. With all the gear still in Perth after the event earlier this month in preparation for this weekend, Debbie and I made the trip across in a car earlier this week instead of flying,” said Grant.

“With this being the first event for Debbie for the year with a new fuel and clutch combination, we wanted to make sure we got in some extra testing for her before we were both hard at racing across the weekend, and while that was a busy day at the track we are now feeling well-prepared for the weekend’s event.

“I am really looking forward to getting into the action in Top Doorslammer – with 18 cars trying to qualify for just eight spots it is going to be a very tough field, especially when you consider that we had an all ‘five second’ field just three weeks ago.”