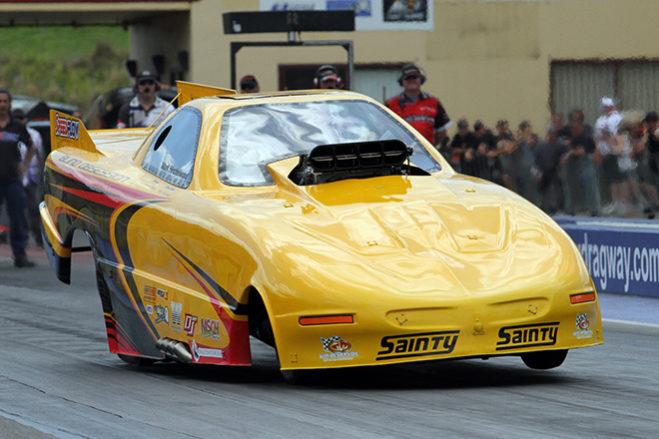 Rookie Top Alcohol driver Mark Hinchelwood is confident the Sainty Blind Obsession Funny Car is on the verge of a breakout pass with the team yet to run the full quarter mile distance.…

Rookie Top Alcohol driver Mark Hinchelwood is confident the Sainty Blind Obsession Funny Car is on the verge of a breakout pass with the team yet to run the full quarter mile distance.

Data collected from their extensive research and development indicate the car is on course for a five second pass and this weekend at the Nitro Champs in Sydney May 2-3 could be the first time Sainty Top Alcohol Racing achieves the milestone.

“Even though Sainty Family Drag Racing has been involved with Top Fuel for many years – alcohol racing is fairly new to them,” explains Hinchelwood.

“Put that with a new crew chief  – Mark Holmes  – and a rookie driver to the Group One ranks and I think you could say we have done very well.  What you have to appreciate with Sainty racing is; if it’s not right, we need to make another and better than the first. That takes time.

“Are we confident of a 5? Our half-track times show us we can easily do it. What a lot of people don’t know is we have not run this car through the finish line yet. We have always lifted at 1000 foot. When we do run a full pass the Rivets (Norm Sainty’s drink of choice) will be flowing.”

According to Hinchelwood a big reason for not completing a full pass is the “rookie driver element” and the use of a nitro style barrel valve on the car meaning he can be on or off the gas only.

“We cannot peddle the car – unless we are in the finals. The nitro barrel valve has a different scroll to conventional alcohol units meaning fuel is not returned the same way. Very easy to melt pistons with this valve as – we have found out. The good news is we seem to have sorted the driver/engine out and I’m confident of running the car out the back door next time out.

“We have also been flat out trying to get our vast inventory sorted. I can confirm we have two complete engines from hat to pan and a spare short engine. The Sainty’s are very keen to wind this car up and see it go!”

For those attending the Nitro Champs, Sainty Family Drag Racing will again be handing out posters and colouring books to kids. So far the team has handed out over 5000 books and are encouraging fans to stop by their pit to meet the team. To follow Sainty Top Alcohol Drag Racing on Facebook please click here.

The Nitro Champs is the penultimate event of the 2015 ANDRA Drag Racing season and will be held at Sydney Dragway May 2-3. Nine Top Fuel and seven Top Fuel Motorcycle teams will battle it out for nitro glory alongside 16 additional ANDRA Drag Racing Series and Summit Racing Equipment Sportsman Series brackets.