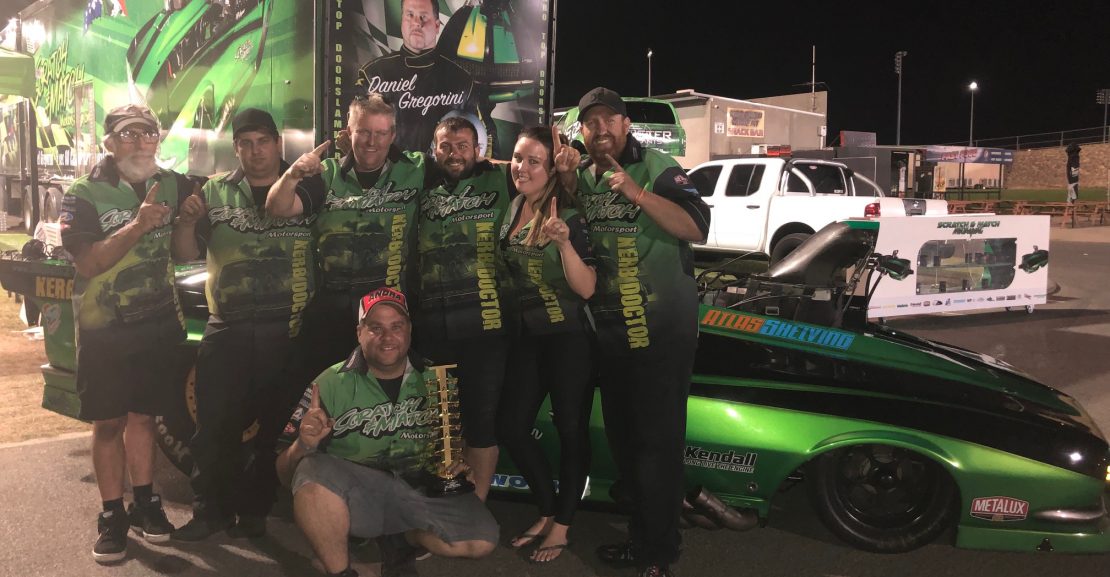 Gregorini, driving the Scratch & Match Autocolour Camaro, defeated childhood hero and now intense rival John Zappia in the final round, taking a holeshot win with a 5.756 to Zappia’s 5.753.

Gregorini’s first Westernationals win came back in 2014, but he said the second one was even sweeter.

“To get just one win was all I ever wanted in my career, being a part time Group One racer without corporate backing, but to grab my second was the greatest feeling ever,” he said.

The road to the final began in qualifying, where Gregorini drove into second position with a 5.762/254.63mph pass.

“We had an electrical issue in Q1 that saw large amounts of ignition timing coming out of the motor so I aborted the run,” Gregorini explained.

“Q2 saw us running our fastest ever speed and time to that point. We elected to go all or nothing to try and snatch top qualifier in Q3 and we had our quickest 60 foot time ever with a 0.953 but knocked the tyres off further out.”

Sunday saw weather becoming more humid, so the Scratch & Match team made some adjustments to better suit the conditions before taking on Pino Priolo in round one.

“We had to work out another way to make power but between myself and James Rowland we were able to keep the car at its best,” Gregorini said.

“We started conservative with a 5.85 to win against Pino and then we became more aggressive in the semi finals against Mark Chapman. There we managed another personal best effort, running 5.753.”

All that remained then was a much anticipated final round where Gregorini faced the tough Zappia.

“The final was the most exciting race of my career,” he said. “It was my 0.055 reaction time against John’s 0.086. It felt like he was starting to catch up and then fell back, we had 202mph at half track to his 198mph and from there we could power on to victory.

“Reaction times win races and my goal was to nail John to the tree, produce another fast pass and let him chase me down. He’s not the 10-time champion for no reason. We read the track well and got the win and proved that his domination is not unbeatable.”

Gregorini said he had strong motivation to win thanks to friends and family who were able to attend the race.

“I had no choice but to win,” he laughed.

“My wife wanted nothing but a gold ANDRA Christmas tree for her birthday during the week, and my Dad Peter’s birthday is on elimination day and he asked for the same.

“My crew guy Stewy was in hospital with his son Dex on Saturday and his young fella told him he could come to the drags but only as long as you win!

“Also a big thank you to the Perth Motorplex staff who worked all weekend for the racers, and to track management and ANDRA for producing such a great meeting and looking after us local racers who unfortunately missed out on a national championship round in our home state this year.”

The recent improvements in performance for Gregorini have been the result of a significant change in combination, where the team moved to a five speed auto transmission, as well as more subtle adjustments.

“Going to the Liberty gearbox with the Neal Chance lock up converter has helped us gain power, but the latest performance gain has been in our suspension set up and we are only running a basic double adjuster shock absorber. Most Slammers these days have full air managed, $30,000 units.

“We still have more improvements left in the suspension area of the car. Being a non-corporate backed team it’s hard to take advantage of the great parts available on the market. We just continue with our 10 year old combo and make gains were we can.

“I believe 5.60s aren’t far away but to take the leap into the low 60s the top guys are running we need newer generation cylinder heads and a more aggressive camshaft and compression.”

There are now only two rounds remaining of the Summer Slam, WA’s own Top Doorslammer series, with Gregorini in the box seat to take the 2018/19 title.

“The Summer Slam is such a great class for local Top Doorslammers racers and a big thank you must go out to the Perth Motorplex and Direct Mining International for making it happen. We’re sitting a comfortable 70 points clear and are hoping to continue our great results and take the series.”