Sting in the tail

Sting in the tail 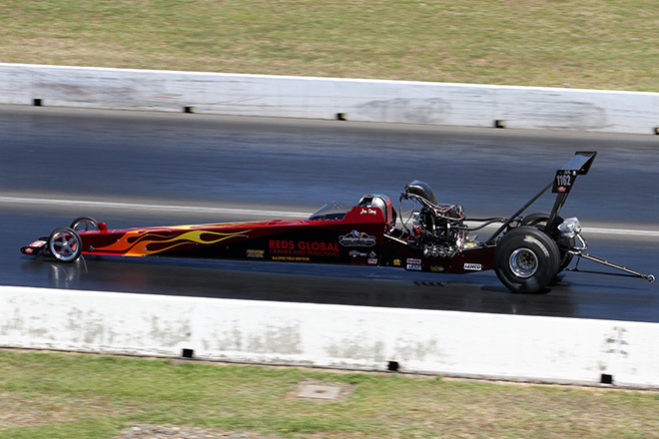 Until the Fuchs Winternationals, this past June, Jon Sting hadn’t raced in 12 months as he focussed on his business; Balonne Field Services.…

Until the Fuchs Winternationals, this past June, Jon Sting hadn’t raced in 12 months as he focussed on his business; Balonne Field Services.

On his return, Sting proceeded to defeat Gary Phillips in the Winternationals final and go on to contest a further two semi finals in his three events for the year, a phenomenal effort for a low budget team.

With new Crew Chief Steve Boyd joining prior to the Winters, Sting consistently maxed out in the 5.50-second zone causing headaches for anyone racing beside him.

“We always seem to end up having a close run,” said Sting. “Steve and I one time at Willowbank won the best-paired pass of the year.

“It seems most of our races have been decided by five hundredths of a second.”

The event win and two semi final appearances was enough to secure fifth place in the standings and with new sponsor Reds Global Cranes and Personnel; he has a strong basis to launch a competitive assault in 2015 – albeit at selected events mostly on the east coast.

“We just made some changes before the Winternationals, some transmission changes and gear ratio changes that have calmed the car down and made it more consistent.

“It’s always been a fast car but I think the consistency is down to the ratio changes.

“It (next season) will be all budget related. My business out here in the middle of the bush is in a dry period so we’ll maybe race in Adelaide, definitely not Perth at this stage.

As one of the few Top Alcohol dragsters in a bracket dominated by funny cars, Sting has the ability and the hardware to shake up the Championship should he secure the necessary support to contest a full season.

And in a shortened schedule during the first half of the year as the ANDRA Championship transitions back to a financial year calendar, he may just have a big say in where the title ends up.

“I think there is still a little bit of room for improvement there performance-wise.

“We seem to learn a little bit every meeting but we don’t run enough to get enough data.

“But every meeting we come away with a few ideas to make the car go faster.

“I want to thank my hard working crew, Steve Boyd, Jason Redman and Ricky and Christine Steffans for their efforts this year and look forward to having Reds Global Cranes and Personnel on board for next season and beyond.”