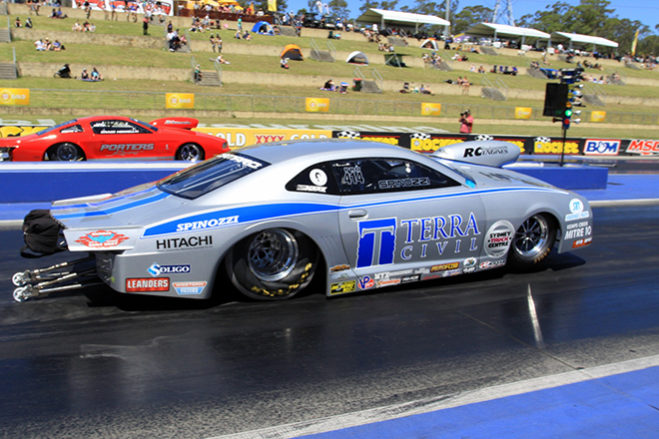 After a five-month break in racing, Spinozzi Racing is ready to make a return to competition trim at the 2015 East Coast Nationals, which will take place November 7th and 8th.…

After a five-month break in racing, Spinozzi Racing is ready to make a return to competition trim at the 2015 East Coast Nationals, which will take place November 7th and 8th.

From the outside, it might appear that the team has been rather quiet however, this couldn’t be farther from the truth. The team has been continuing its engine development program. Working closely with Rino Conte of RC Performance Engines the chase for horsepower took both Emilio Spinozzi and Michael Marriott on a trip to the 2015 Chevrolet Performance Parts U.S. Nationals last month at Indianapolis, Indiana.

“The Terra Civil/Hitachi Construction Machinery team has worked extremely hard during the off-season to ensure that we keep pace in terms of performance. Australian Pro Stock is getting a lot of exposure in the US and that was made very clear to me during my US visit last month,” said Emilio Spinozzi, team owner.

Emilio Spinozzi and Michael Marriott spent the week in Indianapolis for the US Nationals, as well as several days in St. Louis prior to the event for a private Pro Stock test session with V Gaines. A number of other Pro Stock teams were also testing at the same time.

“We got the chance to interact closely with V during the time we were in St. Louis. This was something we were able to setup through Dave Braswell of Braswell Carburettors. Dave has been a major part of Spinozzi Racings success so it was incredible to be able to spend time with him. Also in attendance at the US Nationals was Ulf and Jorgan Leanders from Leanders Clutches as well as Jerry Haas of Jerry Haas race cars, the respective clutch and chassis supplier of Spinozzi Racing,” remarked team crew chief, Michael Marriott.

Spinozzi Racing commenced testing for the 2015 East Coast Nationals, last weekend in Sydney with the team making one full run, netting a 7.03 in less than ideal weather conditions. The team gained some valuable information throughout the test session.