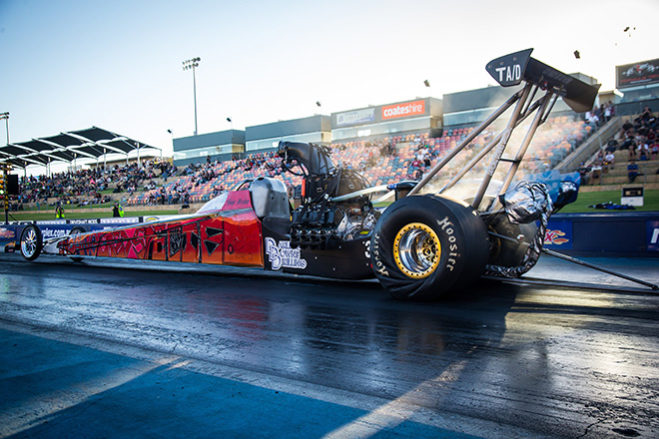 Young gun Shane Weston stunned everyone at Perth Motorplex almost 12 months ago when he shot to the top of the Top Alcohol field to secure the number one qualifier ahead of 16-time champion Gary Phillips in the 2014 Pro Showdown.…

Young gun Shane Weston stunned everyone at Perth Motorplex almost 12 months ago when he shot to the top of the Top Alcohol field to secure the number one qualifier ahead of 16-time champion Gary Phillips in the 2014 Pro Showdown.

That run would eventually come to an end in the semi finals but the performance perhaps shouldn’t really come as a surprise as Weston has been progressing steadily in the West against high quality opposition week in, week out.

He is also currently leading the points in the WA Top Comp Track Championship giving Weston every reason to feel ambitious coming into the Westernationals.

“We are pretty confident,” says Weston. “We have had a bit of a play throughout the season with different clutch settings. Last meet we decided to put the car back to where we left off from last year and we ran a 5.54 against Craig Glassby so we were happy with that.

“We did a little damage to valves earlier in the day when the gearbox broke a sprag so with three damaged seats in the head and to run 5.54 we were very happy.

“We take every meet a race at a time, every race is just as hard as the other. We concentrate on getting down the track hard and fast every lap. Obviously the Top Alcohol round (at the Westernationals) is important, as we would love to have a Gold Christmas Tree and to set a national record.”

Fellow West Aussie Adam Marchant owns the Top Alcohol Dragster (TA/D) national record at 5.517 seconds but Weston is edging closer insisting; “We have a lot more in the dragster yet, only time will tell.”

In time Weston hopes to progress to the cockpit of a Top Alcohol Funny Car himself but is content for now to get after his rivals in a rail and doesn’t feel there is too much advantage one way or the other.

“It boils down to who is the best racer and has the best tune up for the conditions on the day,” said Weston. “I think the only benefit of the dragster would be it is less likely to get out of shape like the funny cars do.

“I would like some day to drive a funny car but that’s later down the track.”