Second running of Nitro Up North a massive success for Darwin

Second running of Nitro Up North a massive success for Darwin 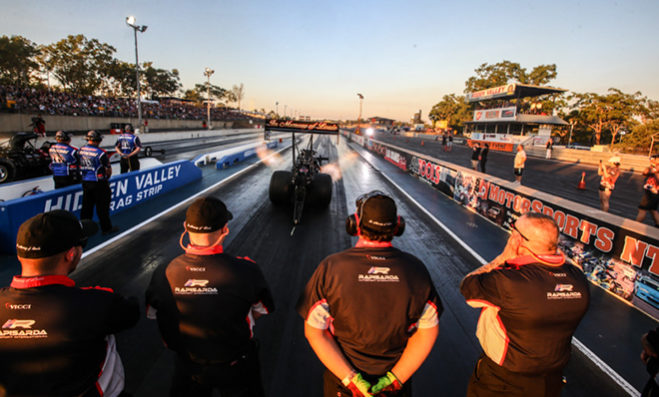 Nitro Up North has rocked the Top End to its core for a second time, with astonishing performances, big spectator numbers and an outstanding response from competitors.…

Nitro Up North has rocked the Top End to its core for a second time, with astonishing performances, big spectator numbers and an outstanding response from competitors.

But most of the headlines came courtesy of the incredible times and speeds run by the four Top Fuel cars in attendance. Damien Harris set a new track record of 4.581 seconds and rookie Aaron Hambridge unleashed an amazing track speed record of 336.49mph (541.52 kmh) – not only the fastest ever speed in the Top End but also the third fastest speed ever logged in the world for a quarter mile distance (402 metres).

Add in the smiles of all the Sportsman winners in the Summit Racing Equipment Sportsman Series and it was an event that will take some efforts to top next year, but Hidden Valley Drag Racing Association president Scott Maclean is confident the team are up to the job.

“The whole Hidden Valley team have delivered a world class event for Darwin and need to stand up and take a bow,” he said.

“Our administration staff, our volunteer officials, everyone has something to be proud of following the weekend. Hidden Valley isn’t a regional track anymore, we are a part of the movers and shakers in Australian drag racing and are focused on delivering the best events possible for our racers and the spectator.

“It’s going to be difficult to improve for next year but I am sure we will be able to find a way. The Northern Territory is full of hard workers and creative thinkers and that combination produces awesome results.”

Maclean took the opportunity to give a special shoutout to the dozens of teams who travelled from across the country to deliver a Nitro Up North show that has been rated the best drag racing event ever in Darwin.

“We know it’s a long way to come here on top of the effort that goes into preparing every drag racing car or bike so thank you to all the teams,” he said.

“The Top Fuel guys did not hold back, as you can see from their times and speeds. The Top Doorslammers and Top Fuel Motorcycles provided the drama we have come to expect and the Sportsman racing was as intense as we have ever seen up here.

“For the teams who are going on to Alice Springs this weekend good luck and we wish you all a safe trip onwards or home.”

While Nitro Up North is finished for another year, drag racing at Hidden Valley Drag Strip is still kicking until later in the year with the next off street meet on July 20 and the track championship coming up on July 30.

“While it’s a lot of fun to see Top Fuel dragsters slamming down 500kmh runs, it’s worth remembering that Hidden Valley Drag Strip is there for everyone to use – you can even bring your grocery getter to the track and see what it will run at our street meets. We hope that even a fraction of the people who have come to see Nitro Up North will think about coming and trying out drag racing for themselves, but I have to warn you – it’s addictive!”??For more information about upcoming events at Hidden Valley Drag Strip check out www.hiddenvalleydrags.com or email mail@hiddenvalleydrags.com.