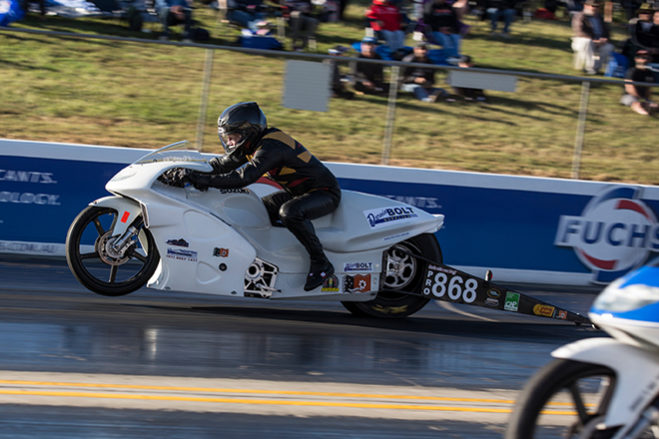 Of the many great things about social media, and the internet, is the way it links us together, whether its something that happened on the other side of the world or a good cause that catches our attention.…

Of the many great things about social media, and the internet, is the way it links us together, whether its something that happened on the other side of the world or a good cause that catches our attention.

For Pro Stock Motorcycle racer Scott White he has a few boxes he would like ticked. First is to win one of the highly coveted gold Christmas tree trophies that are handed to every championship round winner, and the other is to become a national drag racing champion.

Scott has competed in all championship rounds along the East Coast since 2011, finishing third in 2013 and 2014.

Now it’s time to step it up a notch.

Scott, and his crew have set their sights on winning the 2015/16 Pro Stock Motorcycle Championship and are heading down to Sydney Dragway for the first round at the East Coast Nationals in November.

Largely self-funded, Scott knows that in order to achieve his goals, he needs your help. As of today Scott officially launched his “Let’s Get Scott To The East Coast Nationals” Crowd Funding Campaign via the Australian sports crowd funding platform – Teambus – www.teambus.com.au/scottwhite

A range of supporter packages are available – from as little as $25.00, and up to $250 offering a selection of unique merchandise rewards

Sponsor packages are available from $500 offering a range of marketing opportunities while on the other end of the scale there is one spot open for Platinum Sponsorship for $5000. This will provide the individual, or business with eight event tickets, maximum brand exposure, honorary crew membership complete with the start line experience and much more!

In addition Scott, who is a proud supporter of CAP (Christians Against Poverty) will donate 2% of funds raised to this charity.

So all in all, it sure sounds like a win/win situation, one for Scott and the other for the supporters of the Team Bus Crowd Funding Campaign.

You do not need to be a motorsport/drag racing fan to appreciate Scott’s dreams and aspirations to win the 2015/16 Australian Pro Stock Motorcycle Drag Racing Championship. Yes Scott is the lucky rider who manhandles his 300 horsepower motorcycle down a quarter-mile in under 7.20 seconds at 180 mph (300 kph) but YOU can become part of the team supporting him every second along the way!

But you need to be quick as there are limited seats and the campaign ends October 31st.

If you are ready to support Scott, or want more info, then head over to: www.teambus.com.au/scottwhite