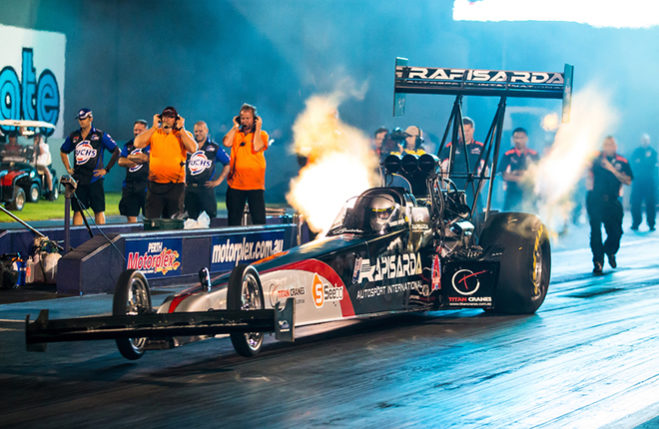 Santo Jr is buoyed by the Damien Harris/Wayne Newby combination as Harris sits atop the points chase while Newby makes steady progress in his first season in the nitro seat.

“The addition of Wayne Newby to our RAI team for 2015 has already proven to be a crucial part of our early success in 2015,” said Rapisarda.

“Wayne has done a lot of machine work for RAI over the off season improving and moving forward with our equipment for both team cars. Wayne, myself and Santino have a great relationship and he fits in great.

“Damien and Wayne get along great and raced against each other in the Alcohol ranks. Already the team chemistry is up on 2014.”

Due to a disastrous weather forecast for Easter Saturday and inclement weather in the days preceding it, the Santo’s Super 3 Extreme Drag Race at Willowbank Raceway, an event that is special to the Rapisarda family, was cancelled putting a pin in the season until the Nitro Champs at Sydney Dragway on May 2-3.

The good news is Damien Harris retains the championship lead with his focus of a hatrick of round wins shifting to Sydney where he hopes to increase his slight advantage over defending champion Phil Lamattina.

“The start of the season has certainly gone to plan and we are working hard to bring every little piece together so we repeat our performances in Perth,” said Harris.

“Santo Jnr has focussed on making some small changes to both the engine and clutch. These little changes have made the engine cleaner than last year and has widened the tuning window. And the clutch has shown more consistency.

“Everyone in the LTFR operation is committed to retain the Top Fuel championship.  We are more focused on ourselves and we need to race smart to continue to collect every possible point on offer.”

Top Fuel now switches focus to the Nitro Champs at Sydney Dragway on May 2-3. Gates open from 8:30am on both Saturday and Sunday with tickets available at the gate. Children under 12 are FREE.

For more information about the Nitro Champs, please click here.