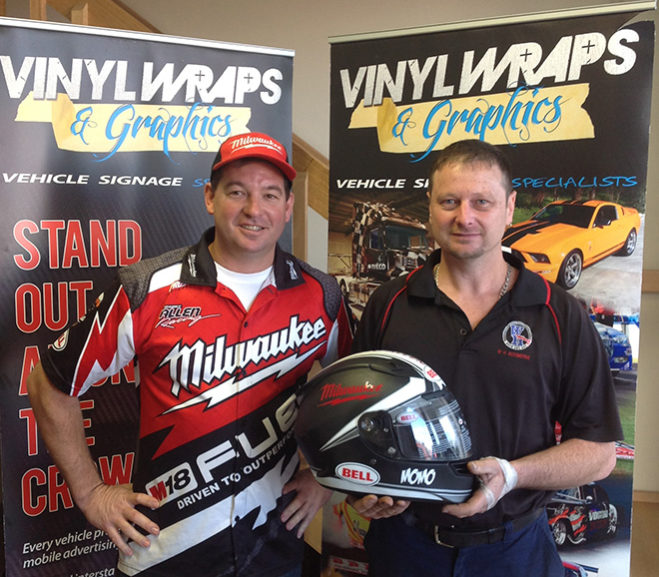 Earlier this year bushfires once again devastated large parts of Victoria. Many people lost their homes and businesses, several suffered even worse.…

Earlier this year bushfires once again devastated large parts of Victoria. Many people lost their homes and businesses, several suffered even worse.

ANDRA member, former Super Gas and Super Sedan racer Wayne Hewitt was one of those victims losing his Ford MK2 Escort, every tool from his 30-year-old business Wayne Hewitt Automotive, as well as other possessions and equipment.

While nothing can ever really replace what is lost, Milwaukee Tools Pro Stock Motorcycle racer Maurice Allen decided to donate a brand new Bell helmet wrapped by Vinyl Wraps & Graphics.

The two first met in April thanks to friends Jan and Dave Andrews who approached ANDRA about the predicament Hewitt found himself. And since talking at the Southern Nationals presented by Fiat Professional and Essendon Chrysler Jeep Dodge at Calder Park, Allen was recently able to hand over the brand new helmet to a thankful Hewitt.

It’s a small gesture but one Allen was keen to make.

“It’s always terrible news when you hear about a personal tragedy but when it happens to a fellow drag racer it’s a call to action and that’s exactly what we did when we heard about Wayne’s terrible predicament,” said Allen.

“So I put in a call to Gary at Bell Helmets and then to Matt at Vinyl Wraps & Graphics and some Milwaukee artwork and we were able to present Wayne with a unique one off Bell helmet that he can either raffle off or wait until he is back at the track and put the new helmet through its paces.

“We were wrapped to be able to put a smile on a fellow drag racers face and keep his spirits going.”

Hewitt was so happy that he is now eyeing a return to the track as soon as he finds a car he just has to have.

“I’m absolutely wrapped, it’s really great,” said Hewitt. “Thanks to Maurice and the team, I couldn’t be happier.

“It’s got me thinking. I haven’t seen a car I really love yet but once you get into drag racing there’s nothing like it and even if you do it only three or four times a year it’s the best thing you can do.”

It’s just another example of racers helping racers highlighting the camaraderie within the sport.

Well done to Maurice Allen, Milwaukee Tools, Bell Helmets and Vinyl Wraps & Graphics and best of luck to Wayne Hewitt as he rebuilds his business with an eye on a comeback to the track.