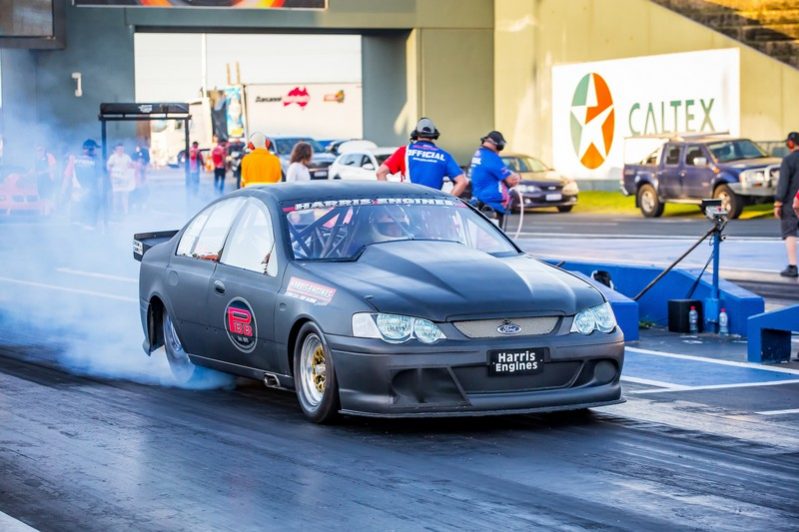 For Super Stock’s Errol Quartermaine, it was a very successful outing at the Perth Motorplex’s 2019 Goldenstates – round four of the 2019/2020 Summit Racing Equipment Sportsman Series – on November 9.

The Hillman (WA) racer not only took out the event victory from runner-up Graeme Simms, he also secured the Decoglaze Glass Splashbacks Top Qualifier Medallion for his class and reset the DD/G ET record from 7.770s to 7.726s and the DD/G MPH record from 172.24mph to 175.06mph.

Quartermaine wasn’t the only racer to break records at the event either, with Competition Bike racer Phillip Paton resetting the DD/CB MPH record from 166.39mph to 169.21mph on his way to a runner-up berth against winner Wayne Patterson. For a listing of the updated records, please click here.

Before facing off against Simms in the final, Quartermaine took victory over Todd Stacy in the opening round before enjoying a bye run in the semi-finals. Simms meanwhile took on and defeated Rob Gaikhorst and Steve Norman on his way to the final.

“We tried to set the car up so it would run ‘seven seventies’ basically and the hot weather mucked around with us a bit,” Quartermaine said, while thanking Harris Engines, All Fast Torque Converters, Park Body Builders and Crow Cams for their support.

“We were having trouble getting the car off the line and that makes it a bit inconsistent, but it was all pretty good overall and we just took some power out of it to make it more consistent.

“At the Grand Final we had a gearbox fail us on that run so it was quite funny that we had him in the first round again this time around, but this time we didn’t have a gearbox problem!

“It was good also to top qualify as we knew if we won the first round we would have the second round bye.

“In the final we both had bad reaction times which was good for me as the weather had changed quite badly and because we had the bye run and we didn’t want to change the car too much, it didn’t run quite as well as we thought it would as we didn’t really adjust for the change in the weather. It was pretty close!

“The records are good to have too – if the weather had been better the record probably would have been into the seven-sixties, it was only that we didn’t really want to change the settings on the car too much.

“We knew from the Powerpalooza and test and tunes that on the level of boost we were running it was running consistent seven-sixties and seven-seventies and that is what we wanted to go into the Goldenstates running.”

The next round of the Summit Racing Equipment Sportsman Series – the DecoGlaze Glass Splashbacks Rowe Memorial – will be held at Adelaide International Raceway on Saturday November 23. For more information, visit www.andra.com.au or www.adelaidedrags.com.au