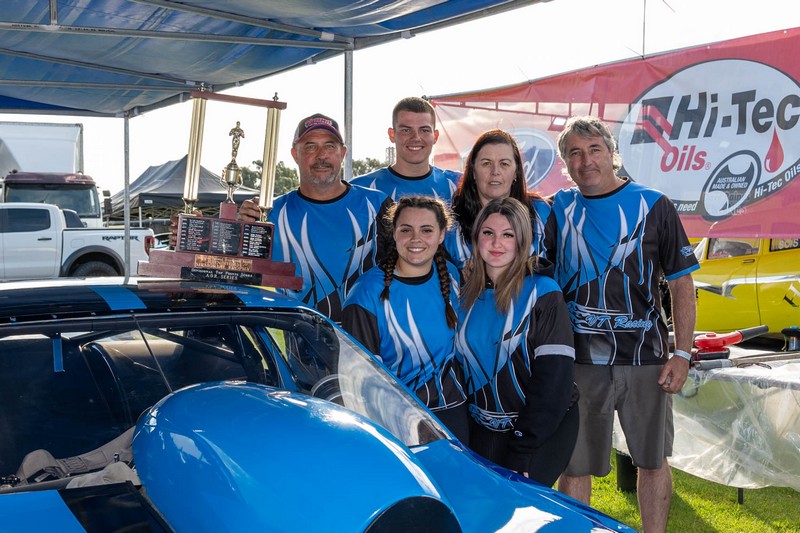 There was no shortage of wide grins at the Perth Motorplex on Saturday evening with the champions of the 2021/2022 Summit Racing Equipment Sportsman Series crowned after two big days of racing for the EGT ANDRA Grand Finals.

A number of these racers had their hands full at the presentations, with Brodie Zappia, Tzokas and Geddes also taking event wins while Paton and Turic claimed the event runner-up honours for their brackets.

Turic in particular had plenty to smile about, claiming the prestigious John Storm Memorial Trophy and Top Sportsman Australian Championship as well as the runner-up trophy for the event.

Commissioned in memory of Mr John Storm, the first National Director of ANDRA, the John Storm Memorial Trophy is an annual national award made to the competitor in Group Two, Three or Four who scores the highest total overall points from all rounds of the Summit Racing Equipment Sportsman Series, including the final event.

“I sort of had an idea that I might have tied it up before we headed over this weekend, but to hold the trophy for the first time was still something pretty special,” Turic said.

“This means everything, it is what we go drag racing all around the country for.

“We haven’t done much differently this year but after changing from methanol to unleaded the car seems to be more consistent, perhaps a bit slower, but very consistent.

“I am not sure yet to be honest how I feel about all of this, it is still sinking in a bit. I am sure I will find out after the meeting!” he laughed.

“Finally, a very special thank you to my son, Tommy Turic. He is my crew chief and has always been there for me.

“Now we look ahead to the next season – we have a new car that we haven’t run yet which is faster with a bigger motor, so we will have to decide if we race this car or the new car. Either way we will go to Alice Springs and Darwin and then take it from there.”

Also taking to the track this weekend for their final round of the Australian Drag Racing Championship were the Top Doorslammer and Top Fuel Motorcycle competitors, with Daniel Gregorini and Greg Durack taking out the championship honours over runners-up John Zappia and Ricky Wood. Stuart Moresby and Chris Matheson were the respective event winners. For more info, please click here.

The Burson Auto Parts Australian Top Fuel Championship also contested its third round of its season this weekend, with Damien Harris taking the win over Peter Xiberras.

Further details from the EGT ANDRA Grand Final weekend including national record updates and quotes from more of the winning racers will be released across this coming week.