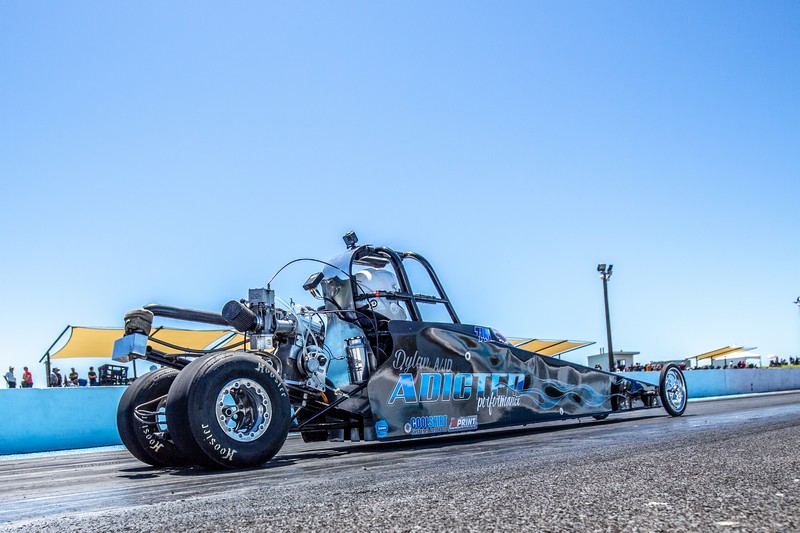 This is the Narre Warren (Victoria) teenager’s first Perfect Light Award after he came very close at the 2019 South Coast Nationals at Portland, where he was the event runner-up to his older brother, Zack Knezevic.

“I was extremely excited and keen to get back in the car after such a long time away.

“We arrived on the Friday for a few test runs, and it all went well. We were able to figure out what changes were necessary to make the car fast and consistent, and in the first qualifying round I qualified second behind Zack with a 8.077s ET.

I was proud of myself and was feeling confident ahead of the next few rounds. In the second qualifying round, I ran a 8.065s ET to be third on the rankings and then in the final qualifying round I was able to qualify second by running a very close time of 8.017.

“In all three qualifying rounds I had very consistent and quick reaction times all under 0.050 seconds, and at this point I was feeling very confident in the cars and the consistency we were having. All in all, I was extremely proud of myself to qualify second considering it was the first event in 13 months for us.

“Then came the first round of eliminations on Sunday. I was the second pair up against Tommy Turic and I was quite nervous but tried to focus on performing my usual routine.

“I obviously wanted to be quick on the tree and when I left, I knew I had cut a very good light which should give an advantage and it did, as I got the win of the round with a 8.063s run.

“Once the run was over, I had high hopes that I was advancing to the next round and once I heard the news I had gotten the win, I was very happy and excited.

“When I returned to the pits, mum and dad and my brothers were all there celebrating for me as I had also just cut a ‘Perfect Light.’

“I was extremely proud of myself and was astounded to hear the news. I have never had a perfect light before although I came very close at the 2019 South Coast Nationals at South Coast Raceway when I cut a 0.001 reaction time.

“It sure felt amazing knowing that my reaction time is really good as it is very hard and takes a lot of practice.

“In the next round of racing I unfortunately lost to eventual event winner Jake Berias due to a breakout. But even so, I really enjoyed the weekend, and I would like to thank my family – my mum and dad and also my older and younger brothers Zack and Levi for always helping me and always encouraging me to try my best at everything I do.

“Levi especially was a great help at the South Coast 660 – in the pits he was doing an excellent job taking care of both of our cars for the weekend with polishing and cleaning and preparing for the next runs and all round being a great little helper.

“I also want to thank the South Coast Raceway staff and volunteers – Portland is one of my favourite tracks because it is very well organised, the classes run smoothly and everyone around you is very friendly and supportive. Even though we are competitive, everyone is always willing to help and is very encouraging which is awesome to be around.

“Looking ahead to the rest of this season and into the next, my plan is to try my absolute hardest for success and to try to advance as much as possible at any event I participate in to earn points in the Summit Racing Equipment Sportsman Series so I can become the Junior Dragster champion.”