PAUL STEPHEN ON THE TITLE HUNT

PAUL STEPHEN ON THE TITLE HUNT 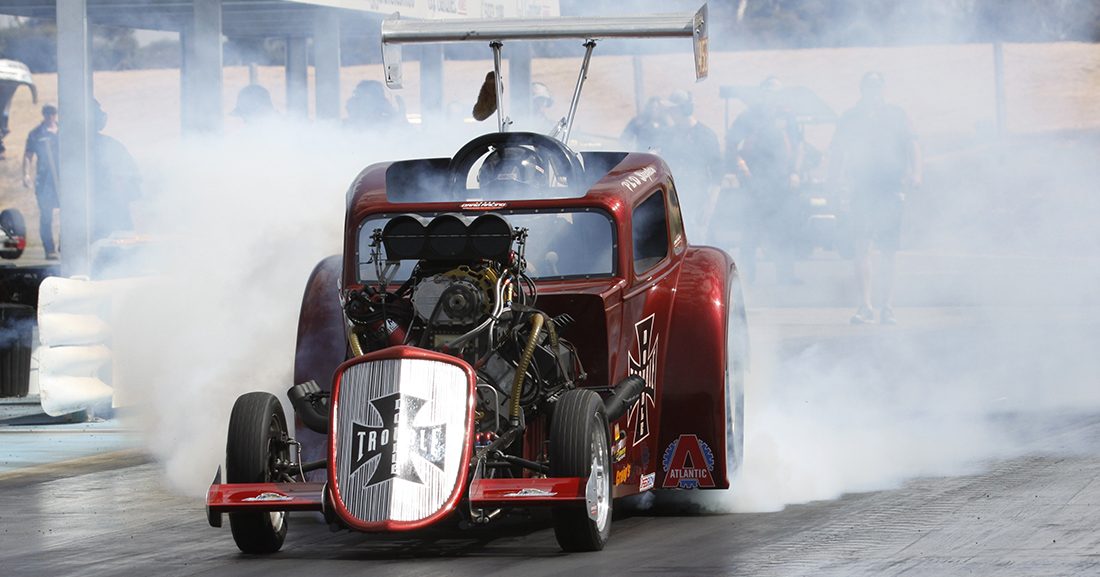 The Sunset Strip Nationals is the third round of the 18/19 series, and will be held across September 22-23.

After many years in the Supercharged Outlaws title top five and a number of runners-up results, the Sydney racer – currently second in the points standings – reports he is fully committed to the 18/19 season aboard his popular ’33 Dodge Coupe.

“After coming runner-up a couple of times and top five many times, my wife Dearne said we could have either another trip to America or go around again to ‘get this out of my system’,” laughed Stephen.

“We have committed to the events in Darwin, Mildura, Portland and we already have airfares booked for the meetings in Perth. We went to Alice Springs too but unfortunately there weren’t enough entries to run the SCO field there.

“The boys are back this year and we are not here for runners-up, we are here to bring home some trophies!

“We have stepped it up and if the young boys want to have a crack, they better bring their A-game as we have turned the wick right up.

“As far as the Sunset Strip Nationals goes, we top qualified there last year before an issue saw us out of the racing early. We have made gains in performance since then and feel like we have all our ducks in a row for racing, so we will be looking to top qualify and then give it our all in the racing!”

Stephen has ensured his championship tilt has gotten off to a strong start, travelling 8,500 kilometres by road to compete at Darwin’s Nitro Up North and bringing home a runners-up result.

“Nitro Up North went really well for us – it was our first time there and a great three weeks away; I couldn’t fault the event or the track,” said Stephen, who thanks Atlantic Oils, Smart Fuels, Craig’s Automatics and Macarthur Garages for their support, John Williard of Flatout Services for building him a brilliant chassis, and also his dedicated crew: Dearne, Neil ‘Gonzo’ Webb and John Ward.

“With the runners-up result, once we fire-up in Mildura we will put ourselves on 120 points, which is a great start.

“As far as the racing goes it went really well – we had one minor issue in the final where we had a bit of a back-fire and it was popping flames on the start line, but all credit has to go to Mark Hunt (Nitro Up North SCO winner) who ran right on his dial-in.

“Aside from that final issue we did have one other minor hitch in the second qualifier where I hit the Mag Switch and turned it off which was a bit embarrassing, especially after all of these years of racing! We have moved to a push/pull switch so that should take care of that!” he laughed.