PATON HOPING TO CONTINUE GOLDENSTATES MOMENTUM IN ADELAIDE THIS WEEKEND

PATON HOPING TO CONTINUE GOLDENSTATES MOMENTUM IN ADELAIDE THIS WEEKEND 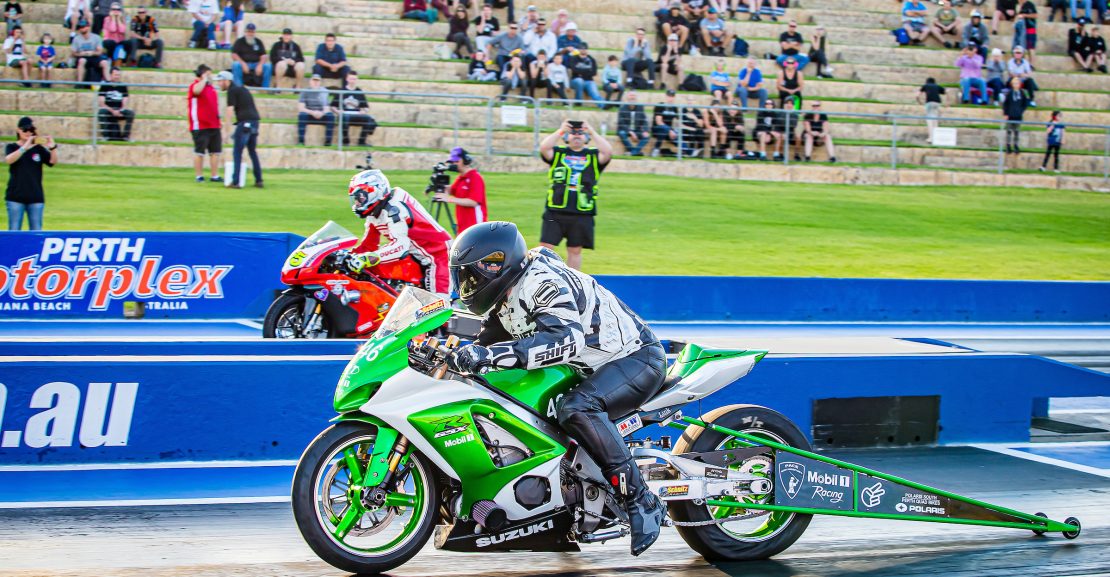 The November 23 event marks the fifth round of the 2019/2020 Summit Racing Equipment Sportsman Series and comes just two weeks after Perth’s Goldenstates where Paton went all the way to the Comp Bike final.

“The Goldenstates were very successful for us – the bike was very fast, we were running under the record in ET and over the record in MPH and I was feeling pretty good,” Paton explained, while thanking Pace Motorsport, Statewide Oil Distributors, Mobil 1 Racing Oil, Straightline2ten Panel and Paint, Perth Quad Bikes, Badger Racing, The Moving Man and especially his wife Vicki for their support.

“We were the DecoGlaze Glass Splashbacks Victoria Top Qualifier Medallion recipient and during the race runs I was taking it fairly safe until I managed to make my way to the final against Wayne Patterson.

“Unfortunately once I was there I made an error – I forgot to two-step my bike and it just rolled through the lights and red lit me out of the game. I just threw it away and it was a bit embarrassing! It was a shame to throw away any chance I had to give ‘Patto’ a good race and potentially take out the meeting. Even so, it was still good fun and I still got some strong points for the runner-up, the top qualifier and the record so it didn’t hurt too much.”

“There is plenty of ET left in the bike against the 8.34 record I set a couple of seasons ago. We can run comfortably under that but it will depend this weekend on whether I can get the bike to run down the track or not!” he said.

“The last time I ran at Adelaide I had a bit of trouble getting it to stick. If I can tune it up to run to the track I might be able to give the ET record a bit of a touch-up. There is a bit of potential to go better with the MPH record as well.

“At the end of the day I just want to place well and preferably win, but if I can just come back with a strong performance I would be happy with that – records are not high on the priority list but they do help with championship points.”

Speaking of the championship, Paton has his eyes firmly fixed on the title battle and is currently second on the points standings with four rounds of eleven completed so far.

“I do intend to challenge for the championship this season so I will be looking to get to as many events as I can and secure as many points as I can,” Paton explained.

“I am working out which rounds I can get to around work commitments but expect to be at the Calder Park Raceway and Adelaide International Raceway events as well as Westernationals in Perth. We will have to see if I can fit in Mildura or Portland between the New Year and the ANDRA Grand Final.”

While he has raced at Adelaide only once before, Paton says he is looking forward to getting back to the South Australian venue.

“I am really excited to be heading back there actually. I have only raced there once before but I really enjoyed it. I especially like the proximity of the crowd to the track and you have a lot of people come through the pits who are really interested and happy to approach you and have a chat,” he said.

“The atmosphere is just really good and my wife Vicki and I are really looking forward to going there again. Hopefully we can walk away with some good results.

“I will be sort of sneaking up on the power I can put down, as I am wary of throwing everything at the track straight up – we will start a bit slow and sneak into it. Once the bike hooks up it should be really good, the short time is where I will really need to concentrate.”

Round five of the 2019/2020 Summit Racing Equipment Sportsman Series, the Rowe Memorial, will be held at Adelaide International Raceway this Saturday November 23. For more information, visit www.andra.com.au or www.adelaidedrags.com.au