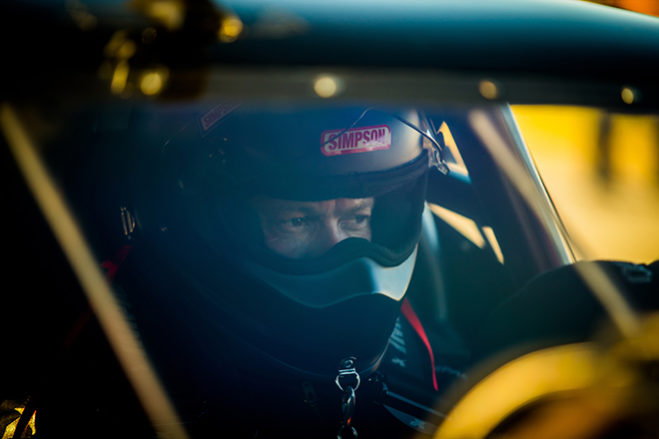 When Grant and Debbie O’Rourke head to South Australia this week for the Adelaide International Raceway’s Pro Series 1000, it will signal a return to a happy hunting ground for the husband and wife team.…

When Grant and Debbie O’Rourke head to South Australia this week for the Adelaide International Raceway’s Pro Series 1000, it will signal a return to a happy hunting ground for the husband and wife team.

Grant took out his first Top Doorslammer event victory at the category’s last event at the venue (October 2014), while Debbie has previously tasted Competition Eliminator success there and was the top qualifier at the last Top Alcohol event – her first in group one at the venue.

“Taking the Top Doorslammer victory in October was very special for us as a team as we were able to dedicate it to our friends Mo, Evie, Otis and their grandfather Nick who passed tragically in the MH17 disaster, and it was my first victory following my comeback to the category,” said Grant O’Rourke.

“I can’t wait to get back on track there as it is certainly somewhere with good memories for me, and also for Debbie. It will be her second trip to AIR in the Top Alcohol bracket, and signal a return to where she has previously tasted success in Competition Eliminator with both wins and her Personal Best result for that category claimed, as well as a Top Qualifying result in her first group one event at the venue.

“As AIR runs the 1000 foot distance (rather than the traditional quarter-mile/1320ft distance) it should suit both Debbie and I compared to our higher-powered compatriots like John Zappia and Gary Phillips who will have to wind back their cars while we can fully unleash everything we have got. We are certainly looking forward to giving it everything we have.”

As they head to Adelaide this week, the O’Rourke Motorsport team – which is currently seeking sponsorship – is in dire need of an upswing in fortune following the devastating theft of more than $30,000 of vital equipment and parts from their transporter when it was parked in the Perth Motorplex pit area following the Westernationals last month.

“It has certainly been a tough few weeks for us, we have been absolutely devastated by the theft on the Sunday night of the Westernationals with many vital parts and pieces of equipment stolen which have set us back quite a bit,” said Debbie O’Rourke, who is currently the quickest (elapsed time) and fastest (speed) woman in Australian motorsport.

“We have been absolutely blown away by the help and generosity of so many in Perth in helping us come back from that blow and also in rebuilding Grant’s car after it encountered engine issues in Perth ready in time for this weekend, there are just too many people to name.

“We are also very thankful for the countless messages and words of support that we have received over social media when the news broke, it has meant a lot to us and helped us keep our heads high.

“It has certainly been challenging and will remain challenging for some time yet, but we will continue to push ahead.”

Grant O’Rourke flew to Perth on the weekend and will commence his journey with the team and the OMS transporter on Wednesday to arrive in time for the commencement of the VPW Pro Series 1000 action on Saturday 14 March for qualifying, with racing set to hit the track on Sunday 15 March.