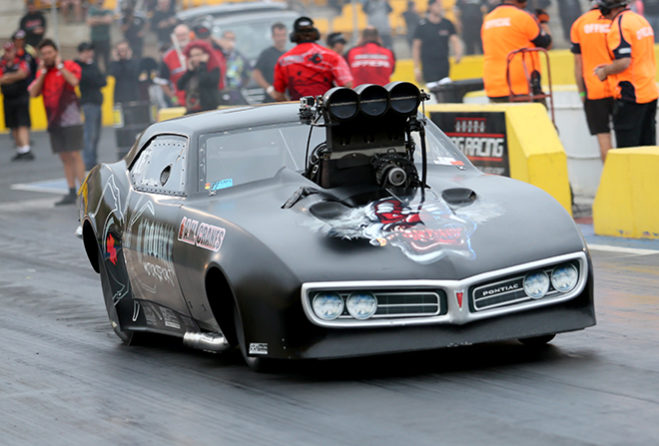 Brisbane racer Grant O’Rourke has ensured he remains in the hunt for the ANDRA Top Doorslammer title by top qualifying and going all the way to the final at the penultimate round of the ANDRA season at the weekend.…

Brisbane racer Grant O’Rourke has ensured he remains in the hunt for the ANDRA Top Doorslammer title by top qualifying and going all the way to the final at the penultimate round of the ANDRA season at the weekend.

Competing at Calder Park over the 1000 foot distance, the ex-pat West Aussie was slated to face-off against Mark Belleri in the event’s final round, however with ongoing delays, threatening weather and dropping temperatures, both racers elected to make the race a ‘no contest.’

Despite this decision, O’Rourke has managed to tighten the gap dramatically between he and eight-time champion (and current points leader) John Zappia, who qualified fifth fastest and was then eliminated in the first round of racing after clipping the timing blocks.

“We were very happy to run a 5.11 second pass straight off the trailer, and while attempts to go a bit faster in the second qualifying session failed when I rolled the beams, it was still enough to take the number one spot,” said O’Rourke.

“The first round was a good and solid run of 5.05 seconds at 223.25 miles per hour against my good buddy Peter Kapiris, and while the car rattled and moved around a little bit I was able to do what I had to do to bring her to the line first.

“In the second round I faced off against Tony Defelice. Unfortunately for him, he left the line early to be disqualified with a red light (for jumping the start), but even so we were still able to punch out a 5.09 second pass at 223.88 mph.

“We were definitely confident heading into the final against Mark Belleri, however as we were preparing the precipitation was building and we were starting to see droplets of moisture on the windscreens.

“We were scheduled to race at 8.00pm, but there was an oil down creating more of a delay, as well as some rain here and there, and the temperature was dropping – that is exactly what you don’t want racing these machines.

“Given all of this, Mark came over and asked what we thought, and after some deliberations – during which the conditions failed to improve – we decided not to run and took that decision to the officials.

“It is always disappointing not to run, but in this game safety is key, and we are confident we made the right decision.”

All that now remains in the ANDRA Top Doorslammer Championship for 2015/2016 is the Grand Final, to be held at Adelaide International Raceway across April 9-10.

“Even though we weren’t able to run the final, with Zap going out early and us taking it all the way to the end after securing bonus points for top qualifying, we made a big dent in his title lead, and for us that is what this weekend was all about,” said O’Rourke.

“We have made sure that we are still in touch, and with one event left to race, we are going to be throwing everything at it in Adelaide in a few weeks’ time to try and make sure it is us, not Zap, taking home that championship trophy.”