O’Rourke and Drew Lead The Way ‘Up North’

O’Rourke and Drew Lead The Way ‘Up North’ 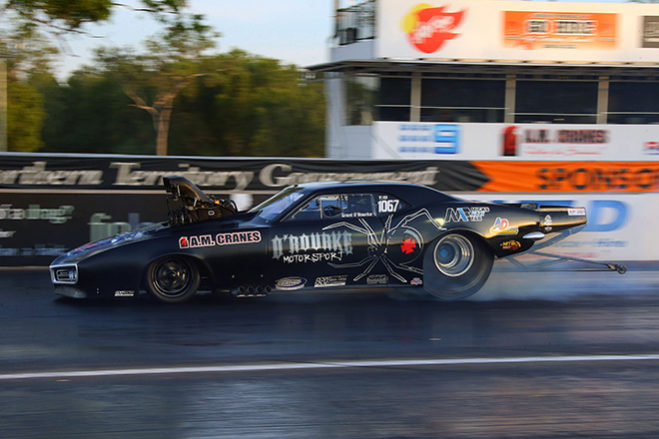 At the conclusion of day one of Nitro Up North, Grant O’Rourke (Top Doorslammer) and Mark Drew (Top Fuel Motorcycle) lead their respective fields in what is the first round of the 2016/2017 ANDRA Drag Racing Season. …

At the conclusion of day one of Nitro Up North, Grant O’Rourke (Top Doorslammer) and Mark Drew (Top Fuel Motorcycle) lead their respective fields in what is the first round of the 2016/2017 ANDRA Drag Racing Season.

Qualifying is now complete for both group one brackets, with racing to commence tomorrow from 4.30pm. For a full list of qualifying results from today’s action, please click here.

O’Rourke tops a field of eight Top Doorslammers who will race tomorrow (Saturday 9 July), while three of his compatriots – Geoff Gradden, Robin Taylor and Bill Goonan – will watch from the sidelines after failing to qualify for the field. For Gradden, the difference between racing and watching was agonisingly close, with his 6.367s result just 0.05 of a second slow of the qualifying time of surprise bump-spot holder and reigning champion John Zappia.

“We are absolutely very happy with the result today, we couldn’t be happier. This is everybody’s goal – to first get in the field, and then to be number one is number one! It is as simple as that,” said O’Rourke.

“We were dealing with what is probably a bit of a high corrected altitude for this time of year, and the track was a little bit slippery and actually quite a challenge to be bluntly honest.

“But you just do a lap, look at what you have got to deal with and just move forward from there and that is what we did. After the first round we were the fifth fastest qualifier, after the second we were third fastest, and then after the third we were number one.

“Tomorrow we will just take each run as it comes. We have a good base line and are certainly happy with where we are starting out from.”

For 2014 and 2015 Top Fuel Motorcycle champion Drew, a new engine didn’t stop him from making sure he put his name on the top of the time sheets.

“I am definitely happy with the number one spot, it is really good,” said Drew.

“The track conditions tonight were a bit tricky, I thought they might be a bit better as when I came here a couple of years ago I was surprised then by how good the track was, but tonight I think everyone was having a bit of trouble getting down there. I think tomorrow will be better.

“It was a good day. At the Winters we broke a crank, so I have had to build another motor during the week and it is a little bit different to the last one so I need a bit of testing time to get it going a bit quicker.

“Tomorrow we will be all about going just quick enough to win!”

Also on the track this evening was qualifying for the Summit Racing Equipment Sportsman Series, as well as exhibition passes from Top Fuel Dragsters and Outlaw Nitro Funny Car racers.

Tomorrow’s racing action commences from 4.00pm with the final sessions of qualifying for the Super Street and Summit Racing Equipment Junior Dragster brackets, before racing for all categories including Top Doorslammer and Top Fuel Motorcycle commences from 4.30pm. Also on the schedule are more exhibition passes from both Top Fuel and Outlaw Nitro Funny Car racers.