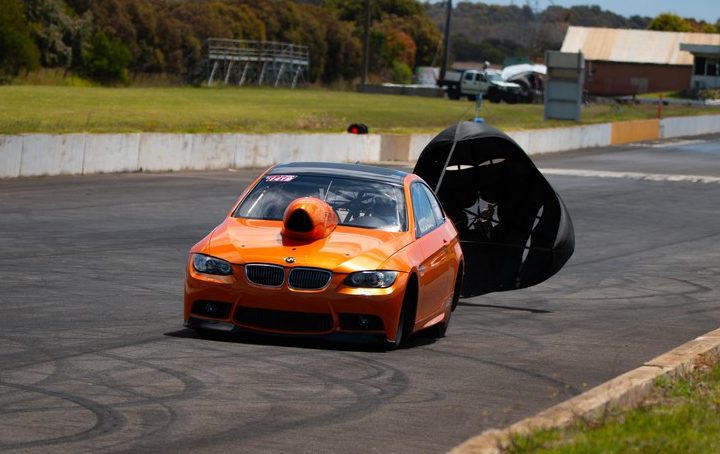 Steve Norman has again rewritten the record books, this time re-setting the ET and MPH national records over the 660ft distance for the C/SMA class at the South Coast Nationals.

Following his performance at South Coast Raceway at the weekend, which also saw him come away with the winners’ ANDRA Christmas Tree Trophy and the Decoglaze Glass Splashbacks Top Qualifier Medallion for Super Sedan, the C/SMA records now stand at 5.480 seconds and 124.72 miles per hour. (To see the updated 660 foot records documentation, please click here).

“It was a really good weekend for us. Because we had changed classes, we had to put a heap of weight on the car, so we were sure to go to the Test n Tune the day before the event,” Norman explains.

“We didn’t know what the track would be like as there hadn’t been much traffic on it lately, but we were more than happy and we went 5.40 on our one and only pass that night – the track was really good and the conditions were outstanding for the naturally aspirated cars, we haven’t seen air like that in years and that is why we went as fast as we did.

“We had been aiming for a mid to low 5.50 and so when the 5.40 came up we were really very happy with that start, and it gave us confidence heading into qualifying and then the round robin racing format.

“Qualifying went well with us taking out the Decoglaze Glass Splashbacks Top Qualifier medallion. When it came to the racing we got through the first round okay, then we had Craig Geddes in the second round where I went red – Craig is a really good operator, and I just pushed the tree a little too hard.

“In the third round we had Dave Roberts and unfortunately, they had been struggling all weekend after making a monumental commitment to attend the event with something like an 18-hour drive to get there, and it is such a shame that they struggled with their car all weekend. We tried to give them a hand, but it just wasn’t enough, and unfortunately, they couldn’t front for the third round with a fuel leak.

“In the final we were up against Craig and usually between Craig and I the racing is really tight, but he got a bit out of shape and backed out of it, and we went through for the win.

“We are very happy overall with how the weekend went – obviously it is a balancing act when it comes to touching up the record, but we were able to carry on our merry way without hurting the record too much and claiming the win.

“I want to single out Simon from RaceFuels.com for a big shout-out – he sells us the ETS Fuel we use exclusively and with our record performances we are obviously having a great amount of success with it. So, thank you to him for his help and support.

“I would also like to say a big thank you to the track and their officials who were really at it all weekend – they always put on a good show and the place is just absolutely fantastic to race at.

“Also thank you to my crew, Reg and Ryan Lee and my grandson Connor, and to my ever-suffering wife Lynn who unfortunately couldn’t join us at the weekend.”

The Summit Racing Equipment Sportsman Series will return to Portland across January 22-23, 2022, for its next round. For event information, go to www.southcoastraceway.com.au