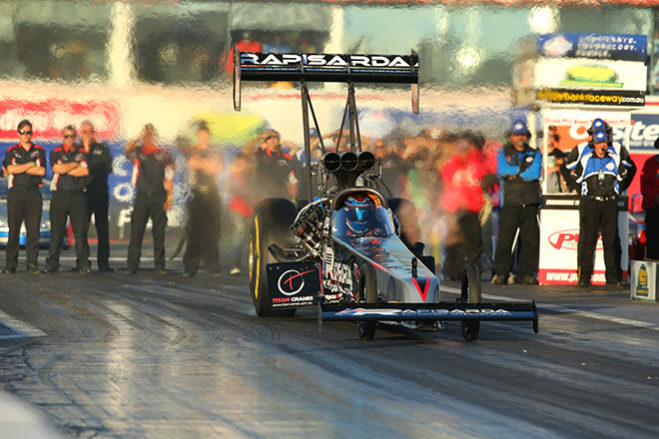 Darwin’s Hidden Valley is set for a horsepower show like its never seen before when Round 1 of the 2015/2016 ANDRA Drag Racing Series descends on the Valley on the 17-18 July.…

Darwin's Hidden Valley is set for a horsepower show like its never seen before when Round 1 of the 2015/2016 ANDRA Drag Racing Series descends on the Valley on the 17-18 July.

Headlining the show will be the two car exhibition Top Fuel team of Rapisarda Autosport International featuring current Australian champion, Damien Harris alongside runner up, Wayne Newby. With speeds over 500km/hr the Northern Territory has never witnessed the power of Top Fuel drag racing in its 30 year history.

With national records of 4.5 seconds and over 530km/hr Top Fuel are the loudest and fastest drag racing class in the world.

“While we have hosted Top Doorslammer and Top Alcohol here in the past, Top Fuel is a completely new level that will add a new element to the event” said MacLean.

“With 2015 being our 30th anniversary we wanted to show the Northern Territory what the most powerful motorsport in the world is really like.”

Round 1 for Top Doorslammer and Top Alcohol championship categories will also be on track both nights.

With a boost in numbers, Top Doorslammer will be represented by 15 teams, the largest Doorslammer field to ever compete in Darwin. Included in the lineup is reigning 8 times champion, John Zappia, as well as current speed record holder, Peter Kapiris.

Also featured over the weekend will be Top Alcohol including the top three point scorers from 2015, Gary Phillips, John Cannuli and Steven Reed. They will be doing battle against Jamie Noonan, Debbie O’Rourke, Aaron Deery, and Hidden Valley’s own Scott MacLean.

Top Fuel, Top Doorslammer and Top Alcohol will also be joined by a host of local and interstate sportsman racers competing over both nights.