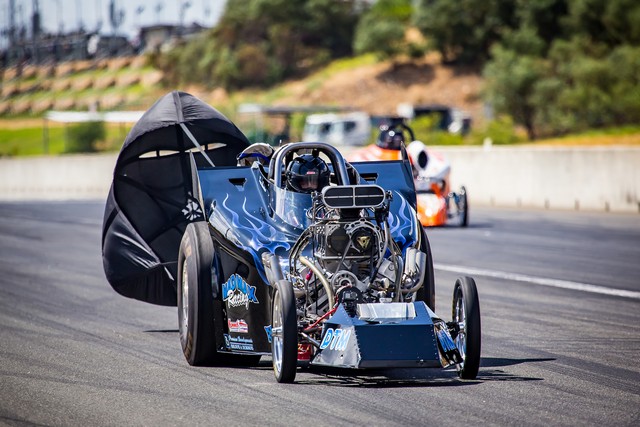 Trent Morrison secured his second consecutive Westernationals victory earlier this year with a record-breaking performance in the Competition bracket.

Currently third-placed in the Summit Racing Equipment Sportsman Series rankings for his category, the 29-year-old Cabinet Maker from Marangaroo in WA is now considering travelling for the first time to mount a challenge for the ANDRA championship.

“I have never travelled to compete for a national event before but with the point score being so close between the top three, we are definitely looking at heading over to try and take out the championship,” Morrison said.

“It was seeming like it would be near impossible for us to do so with the tight turn around between the events here in Perth and the original scheduled date for the Summit Racing Equipment Sportsman Series Grand Final.

“However now that it has been rescheduled the car is ready to go and we will be sitting on the edge of our seats waiting for further information on COVID restrictions and our state borders opening.”

“It was great to take out the Westernationals win and set a national record in the process,” he said.

“As the biggest event on the WA drag racing calendar, the Westernationals always brings out the best competitors and you are guaranteed to be racing in a tough field.

“We knew we would have to bring a strong and competitive package when fronting up against the top qualifier in round one but the car had the potential to run the numbers to see us through to the end of the event and it did.

“It was a great achievement for us also to back-up the 2019 Westernationals win – all competitors dream of owning a Gold Christmas tree and while dad won the Westernationals at Ravenswood in 1986, back then the winner received a plaque. It is great now as we don’t have to share one between us anymore and we can both have a ANDRA Gold Christmas Tree in our trophy cabinets at home,” he chuckled.

There is no doubting that for Trent Morrison, drag racing is a family affair.

“Drag racing has always been a family affair for me growing up watching my dad race since I was born,” he explained.

“This season I have been able to bring my daughter to watch me race which has been great – she definitely has drag racing in her blood and loves wearing her ear muffs and turning spanners with her Poppy!

“I am also looking forward to seeing my wife Michelle Morrison (Osborn) getting back in the racing seat for the new season after taking some time out to have babies since winning the Modified Australian Championship in 2015.

“I really want to thank my family for supporting me with my racing endeavours and especially my dad for giving me the opportunity to drive his car and to achieve so much in my drag racing career.

“I would also like to thank my sponsors Ranch Automotive Engineers, Dimoff Transmissions and my crew Rob and Moose for dedicating so much of their time and effort to make this all possible for me.”