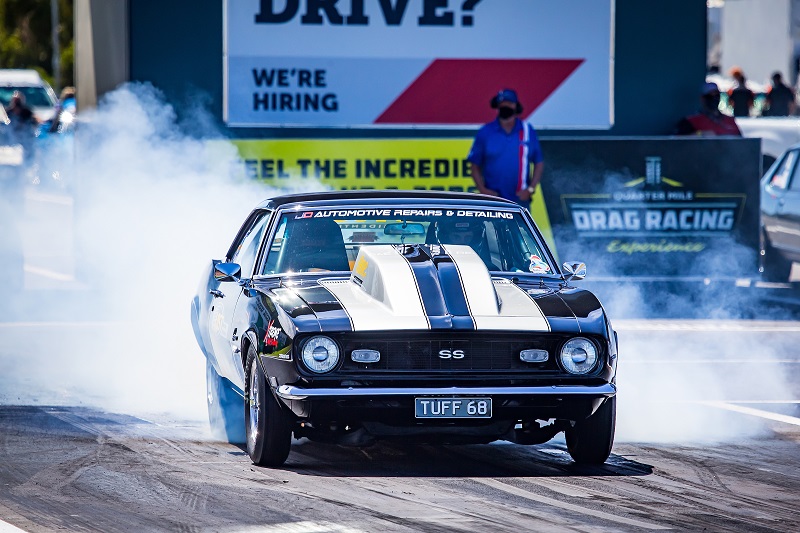 If Martin Mirco can overcome his championship rivals in Super Sedan this weekend at the EGT ANDRA Grand Finals, then he will secure an impressive third straight Summit Racing Equipment Sportsman Series Championship.

Across Friday and Saturday at the Perth Motorplex, 13 national titles will come to an epic conclusion across the 2021/2022 Summit Racing Equipment Sportsman Series (SRESS) and the Australian Drag Racing Championship (ADRC).

“I have been in this situation many times before in recent years, at both national and state level, and in the tough Super Sedan class anyone can beat anyone in any given race, so I don’t take any opponent lightly and just concentrate on running my own race.

“I set a goal at the end of last season to commit to travelling again and go for the hat trick and win three in row and we will be doing everything we can this weekend to achieve that goal.

“Our season started off really well with a win at the opening round in Darwin, but it hasn’t really gone to plan since then.

“While we have had a couple of missed opportunities to increase our points lead at the last two rounds and that has been a bit frustrating and disappointing, we have put that behind us and now it is all about going rounds in the Grand Final.

“Leading up to this weekend we have been doing as many laps as we can in preparation for another chance at the national championship and our focus is completely on hopefully bringing home the title.

“Peter is a great friend, a past champion and a tough competitor so you can’t take him lightly. We got the win against him in the final in Darwin, so we’ll be looking to do the same here in Perth.

“Des has also had a win this season in Alice Springs, so he knows how to go rounds and win a final as well. I think it is Des’s first trip to Perth so it will be interesting to see how he performs at the best track in the country.

“It is certainly going to go down to the wire and will be a tough finish to the season, but we will approach the Grand Final like we do every other race meet and that is with a focus on winning an ANDRA Christmas tree.

“I try not to think about the title pursuit too much so I can try and stay focused, but it certainly will be a huge achievement to win three in a row if we can do it. It has only been done twice before in Super Sedan, so we will be working hard on the weekend to win another championship!”

Mirco’s commitment to victory was well demonstrated in Mildura just a few weeks ago at the penultimate round of the season.

“We had some issues with the car in Mildura when we destroyed the ring and pinion in the diff in qualifying late Friday night,” he explained.

“With the awesome help of my crew, friends and fellow racers, we pulled the diff out after qualifying and drove through the night to Adelaide and then back to Mildura to pick up a borrowed diff centre and we got it all fixed on Saturday morning in time to race on the Saturday afternoon.

“Once back home, I got my broken parts replaced and although we will be running a different gear ratio this weekend, we are ready to go.

“As always, I would like to thank my wife Laura and daughters Ella and Jenna for all of their support in me travelling the country chasing my dreams.

“Thanks also to my crew Jason, Ray, Joey, Micky and Danny for their time and effort travelling with me on the road trips; and to my sponsors One Residential, Lost Racing Products, WA Bolts, JD Automotive Repairs & Detailing and Xtreme Auto Detailing.

“Last but not least, I must say a special thankyou to Ned and Nikolas Karanovic and the Karanovic family for lending me a spare diff centre and helping me get the car back on track in Mildura last month; and to Alby and Zac for all their help working on the car late at night in Mildura as well.”