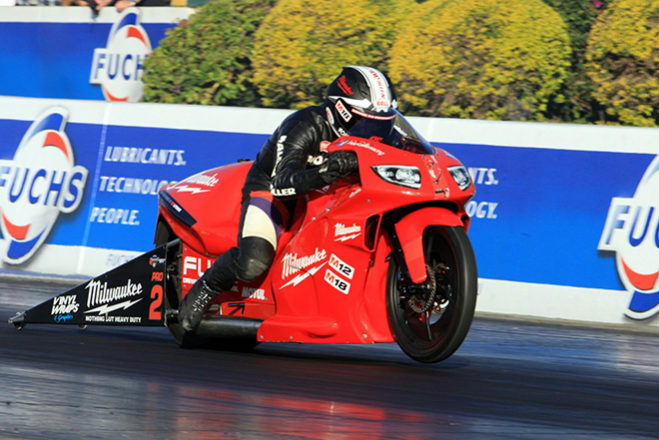 But that won’t stop Momo from trying to knock off his rival on a track he knows well.

“Adelaide is a great city; the spectators get out and enjoy their motorsport,” said Allen.

“It’s good to go back and see a lot of old faces from the early days of Drag Racing when I was growing up as a kid. And it’s always good to come back to people who have been starved of Drag Racing for quite a long time.”

Allen and Crowley have been locked in a battle fof supremacy for the better part of two years and races between them repeatedly come down to the smallest of margins.

The last time the two met at Adelaide International Raceway (February 2013), Allen defeated Crowley on a three-tenths holeshot, however at the Fuchs Winternationals in June, Crowley repaid the favour with a dramatic holeshot win of his own to take the trophy and a significant Championship lead.

Despite the loss, Allen hopes to pick up where he left off and get an early edge on Crowley this weekend. But just what will it take for Momo to get his first ANDRA Drag Racing Series round win in 2014?

“For the rider to wake up,” he adds. “If anything we’ve put pressure back on him to improve his game and I’ve obviously got to look at that area and improve.

“But we’ll aim to be consistent like we always do, you’ve got to be there at the end to at least have a shot.”

Time is running out for Allen to make a run at the Championship with the cancellation of the Grand Finals at Calder Park due to track upgrades and an 84-point deficit to make up.

Only the Fuchs Spring Nationals and Australian Nationals in Sydney remain and although the title is not completely lost, Allen is already thinking of what might have been.

“We’re obviously disappointed with the outcome of the end of the season and losing a round makes it pretty tough.

“With Milwaukee as our sponsor we just have to put our best foot forward as a race team and go out there, make every round count and make Milwaukee proud. It’s all we can aim for and all we can hope for.

“It’s one of those things it (the Championship) is not really a focus, you’ve got to win the race meeting first to put yourself in a position to bag some points.

“It all starts with qualifying, you’ve got to qualify well and unfortunately I’ve qualified second behind Luke and it’s meant all year I’ve had to do all the racing in the first round and the semis.

“But that’s racing, you create your own luck and the team will be doing it’s best to turn that around this weekend.

The Fuchs Spring Nationals will see one of the strongest Pro Stock Motorcycle fields this season alongside Top Fuel, Top Doorslammer and the Aeroflow Sportsman Drag Racing Championship.

Action begins from 9am this weekend on both Saturday and Sunday at Adelaide International Raceway.