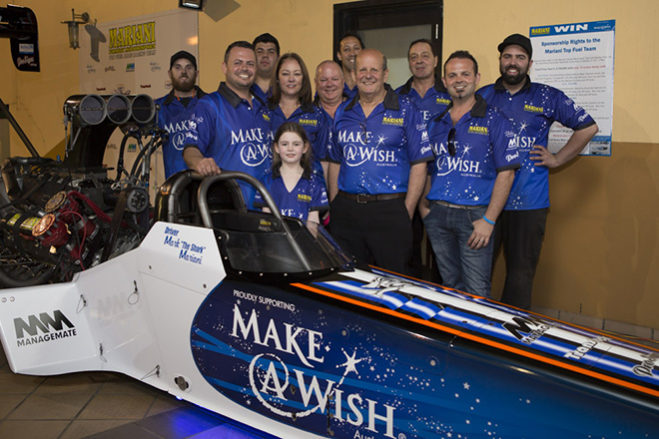 Mariani Family Motorsport have teamed up with Make-A-Wish Australia by donating branding and VIP rights to their Top Fuel operation in support of the organization.

The crowd held their breath as Mark and the crew fired up the 8000hp Top Fuel Dragster that had been placed in the courtyard complete with new Make-A-Wish livery and lit up with spotlights and blue LED’S.

Mark “The Shark” Mariani, the showman that he is, blipped the throttle 3 times, which cannot possibly be explained, it must be experienced.

Mariani Family Motorsport are also selling sponsorship rights to their operation, this proved popular with two of only ten tickets being sold, snapped up on the night.

The team now prepares for the Australian Drag Racing Nationals to be held at Sydney Dragway on Oct 31 – Nov 2.

Whilst preparing for one of the biggest events in Australian Drag Racing, the team will be feverishly raising further awareness and funds for Make-A-Wish with displays, media appearances and a black tie event at one of Australia’s iconic venues all planned.