LYLE AIMS TO TAME THE MUSTANG IN ALICE SPRINGS

LYLE AIMS TO TAME THE MUSTANG IN ALICE SPRINGS 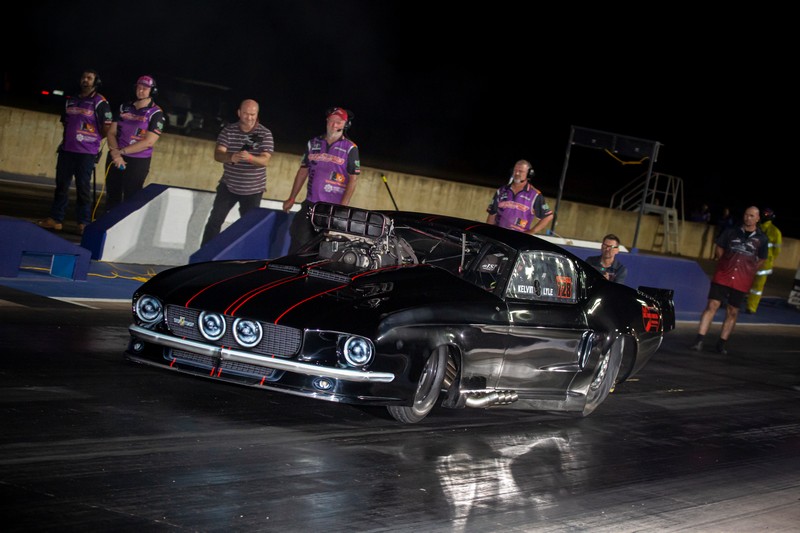 Top Doorslammers have a reputation for wild handling – something Western Australia’s Kelvin Lyle is all too aware of heading into this weekend’s Desert Nationals at Alice Springs Inland Dragway (July 24/25), which will host round two of the Australian Drag Racing Championship (ADRC) and the Summit Racing Equipment Sportsman Series (SRESS).

At the ADRC-opening Top End Nationals in Darwin, Lyle experienced two out-of-control moments in just one qualifying run. The first came when he put his 3500 horsepower Direct Mining & Industrial Ford Mustang on two wheels during the burnout, while the second came at the other end of the track at close to 400km/h.

“I got the chutes out as soon as I could to get it straight and it somehow missed. I thought it touched the wall and so did everyone on the start line but there was no damage at all except to one of the parachutes.”

Lyle was able to keep control for eliminations but was held back by a bad spark plug. He could only muster a 6.16 against Matt Abel’s 5.94. A later grudge run saw Lyle able to hit a 5.83, showing he could have been in contention for a win were it not for the faulty plug.

“It’s just one of those things, and at least it was not a major electrical issue,” he said. “The car is in one piece and ready for the Desert Nationals at Alice Springs.”

It will be Lyle’s third time competing at Alice Springs Inland Dragway. He said the experience of racing in the Red Centre gives him some nostalgic feelings.

“It’s a little bit like the Ravenswood days in Western Australia, a small town race track where the people are some of the friendliest you will ever meet,” he said.

Once the second round of the Australian Drag Racing Championship is complete, Lyle plans on contesting as much of the series as he can in the hopes of adding a national title to his achievements.

“I miss racing nationally like we were doing before, and I like going to different tracks and meeting new people,” he said. “I have never raced at some of the tracks we will be heading to and that is exciting. Everyone is positive right now and we are all about racing when and if we can.”

Lyle has recently added a secret weapon to the team to bolster his chances, in the form of experienced crew chief Stuart Rowland.

“Stuart is definitely going to be an asset to the team. He was here for Darwin and did a great job considering our data logger had no driveshaft speed sensor! He did the whole weekend without one of the most important pieces of data you need. To run a 5.83 by the end of the meet was amazing.”

The Desert Nationals at Alice Spring Inland Dragway begins on Saturday, July 24 with qualifying from 11am. Race day takes place on Sunday, July 25, also commencing from 11am. The event includes the second round of the Australian Drag Racing Championship and the Summit Racing Equipment Sportsman Series.

For event information, go to www.cadra.com.au or www.andra.com.au.
IMAGE AT TOP: CREDIT TO HIGHRPM