Lamattina to Harris: Catch me if you can? Don’t panic I will be!

ANDRA > Newsroom > Latest News > ANDRA Drag Racing Series > Lamattina to Harris: Catch me if you can? Don’t panic I will be!

Lamattina to Harris: Catch me if you can? Don’t panic I will be! 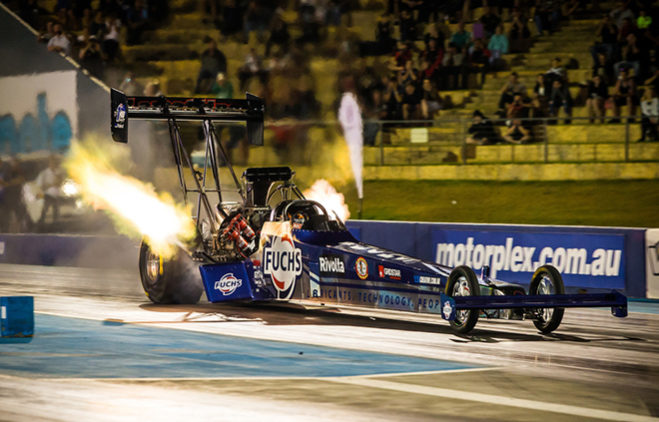 Phil Lamattina has fired back to Damien Harris’ claim that all the pressure is on the defending two-time ANDRA Drag Racing Series Top Fuel Champion when the curtain comes down on the 2015 season at the Fuchs Winternationals.…

Phil Lamattina has fired back to Damien Harris’ claim that all the pressure is on the defending two-time ANDRA Drag Racing Series Top Fuel Champion when the curtain comes down on the 2015 season at the Fuchs Winternationals.

Just 26 points split the two as the season finale looms at Willowbank Raceway June 4-7. As if a game of tennis, Lamattina served back to his title rival and sparring partner suggesting it was in fact Harris who is under pressure to maintain his slight advantage.

“What have I got for Damien? Catch me if you can? Don’t panic I will be!” said Lamattina.

“He (Harris) has an enormous amount (of pressure on him). That’s just trying to shift it at the moment.

“The pressure is on him because one little slip up and he’s got not only me but his teammate Wayne Newby breathing down his neck.

“If he slips up just that little bit, we can pounce. With one round and a couple of bonus points for top speed and elapsed time taken away from him, I tell you what…

“Put it this way there’s some pretty tough cars out there all vying to make a name of themselves at the Winters. Don’t forget we’ve got Mark Sheehan, Peter Xiberras, The Pom (Steve Read), all tough competitors. Anyone can do it.

“But I’m hoping with their three Rapisarda cars at least one bloke might return the favour from last year when Harris beat Dobbo and hand it back to me on a platter!”

As the verbal jabs keep flying, Lamattina will focus his attention this weekend on a new chassis imported from the United States when testing begins at the Winters Warm Up May 30-31.

“We took the opportunity with the rained out Nitro Champs to put the car together,” adds Lamattina.

“We were going to wait until next season but we’re running at the Winter Warm Up to put some laps on it and not go completely blind with a new chassis.

“Sometimes we’re calculated and sometimes you’ve just got to take a gamble. It’s a gamble on a new car and hopefully it can deliver that little bit of an edge.

“The conditions are going to be right, Rapisarda are coming back off running in the US and running some really, really quick times. Even though to the 1000-foot their increments are low 4.50s high 4.40 second passes.

“I’m pretty sure they’re going to throw the kitchen sink at it, they’re not coming there for shits and giggles that’s for sure.

“At the moment I’m just focussed on getting my car qualified and hopefully when that is solid in the field I might be able to glance over to see what John (Lamattina) is up to.

“First thing first is we’ve got to focus on the two Fuchs Top Fuel Dragsters in the field and race day at this stage, let’s not even predict it. It’d be harder to pick than a broken nose.”