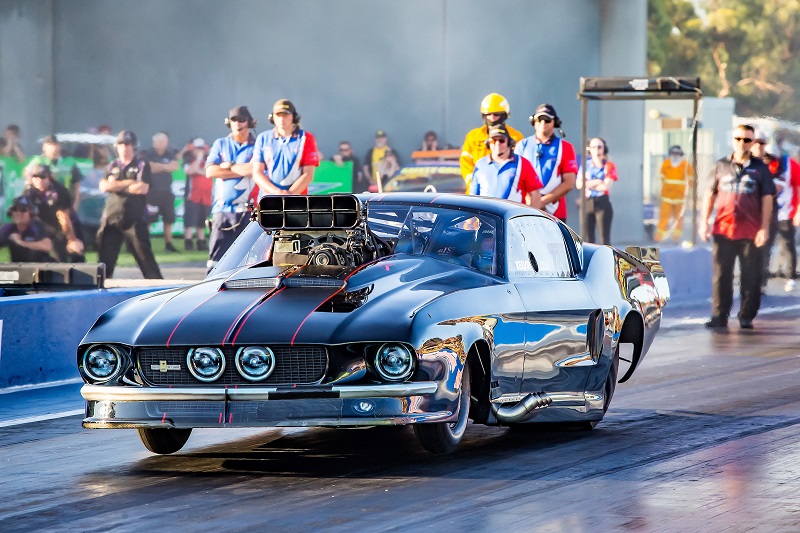 When the 49th annual Westernationals hits the Perth Motorplex later this month (29 February – 1 March), it will feature not only the latest round of the 2019/2020 Summit Racing Equipment Sportsman Series, but also the WA Top Doorslammer Challenge as well as Top Fuel Motorcycle and Top Fuel action.

The competitors of the WA Top Doorslammer Challenge will compete for a prestigious Gold ANDRA Christmas Tree Trophy and will also be able to earn points towards the track’s Summer Slam Series.

The 2018 Summer Slam Champion, Kelvin Lyle, said he is looking forward to all the Westernationals event has to offer.

“The Summer Slam has been great for all of the Doorslammer cars here in Western Australia and I was very pleased to win the inaugural Series,” said the 52 year old from Bussellton (WA).

“Before the Series was introduced two seasons’ ago, I was keen to help get it going so my company – Direct Mining and Industrial International – sponsored the series and has done every year since.

“I think it is good for the crowds to have a class of just Doorslammers since we have plenty of them in WA, and it is also good practice for drivers who are competing nationally.”

Lyle says we can expect plenty of great performances from the Top Doorslammer competitors at the Westernationals.

“This year has certainly seen a lot of cars setting PBs and really going fast,” he said.

“You have John Zappia who was struggling a bit towards the end of last season as he was trying new things with the car and now he has totally turned things around a couple of meetings ago and has gone out and run a 5.58s pass.

“Daniel Gregorini has also stepped things up this year and is constantly running in the five-sixes and I think it will be one of these guys that wins the Summer Slam Series this year.

“For us we are still trying to sort out our new car that arrived here from the USA last October. It is quite different from the last car, which I crashed at Willowbank back in January 2019, but we are slowly getting it sorted with a 5.73s pass being the best we have done in this car at the moment.

“I think the fans can expect fast and quick racing from the Doorslammers at the Westernationals – when you look at the quality of Doorslammer cars here in WA they are up with the best in the country.”

According to Lyle, having a Gold ANDRA Christmas Tree trophy up for grabs is likely to add extra spice to what is already an exceptionally competitive event.

“I haven’t won an ANDRA Gold tree and having one of those up for grabs certainly ups the ante,” he said.

“Most people know that when I compete interstate that I bring Jon Salemi over from the USA to help with the car.

“The Westernationals, especially now with a ANDRA Gold tree up for grabs, means so much to the racers to do well as it is one of WA’s biggest and best meetings of the year; so I booked Jon to come over for this meeting as well.

“Hopefully with his help we can get some good runs in over the Westernationals weekend and even better, maybe we can come away with a win!”

The 49th Westernationals will mark round eight of the 2019/2020 Summit Racing Equipment Sportsman Series and will be held at the Perth Motorplex across February 29 to March 1, 2020. The event will feature not only all the racing for the Summit Racing Equipment Sportsman Series, but also Top Fuel, the West Coast Top Doorslammer Challenge and the West Coast Nitro Bike Challenge. For event information, visit www.motorplex.com.au or www.andra.com.au