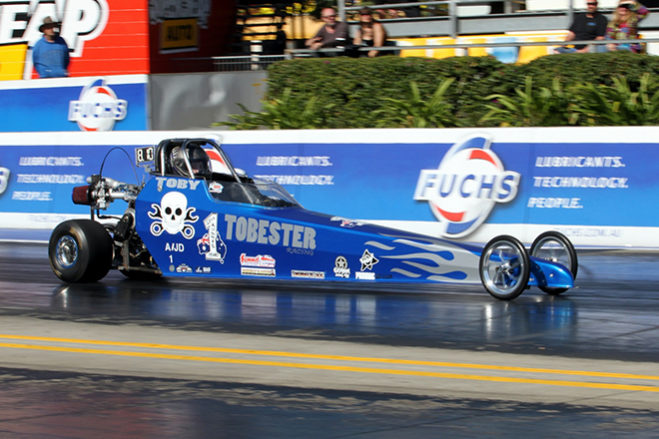 Several awards were handed out or decided following the Fuchs Winternationals at Willowbank Raceway including the John Storm Memorial Trophy.…

Several awards were handed out or decided following the Fuchs Winternationals at Willowbank Raceway including the John Storm Memorial Trophy.

Commissioned in memory of Mr. John Storm, the first National Director of ANDRA, this is an annual national award made to the competitor in Group Two, Three or Four who scores the highest overall points total from all rounds of the Summit Racing Equipment Sportsman Series, including the final event.

Junior Dragster Toby Austin added the John Storm Memorial Trophy to his 2014 Junior Dragster Championship totalling 320 points following an event win in Adelaide, two runner ups at Willowbank Raceway including the Fuchs Winternationals and a quarter final appearance in Round 1 at South Coast Raceway in Victoria.

ANDRA extends its congratulations to Toby on an outstanding achievement in 2015.

Other awards handed out at the Winternationals included the Longest Distance Travelled Award, presented to the driver or rider who travels the longest distance within Australia to attend the Australian Nationals, the Winternationals and the Westernationals. Brian Hotker was the recipient of the award after he made the trek all the way from Australind in Western Australia.

Congratulations also to Jake Donnelly and Team Donnelly Blasting Services for being awarded the Gridstar by YBI Best Presented Award, given out to the best presenting Sportsman team at each Summit Racing Equipment Sportsman Series round.

Team DBS looked the part around the pits and the startline while running the 57 Chev Funny Car in Supercharged Outlaws and doubling up with the beautiful Chevrolet Nomad in Top Doorslammer.

And finally Winternationals Modified Bike top qualifier Kerry Ellis won the Perfect Light award with a .000 reaction time in a Round 1 victory over Johnny Ireland. The Perfect Light is awarded to the first Summit Racing Equipment Sportsman Series racer to achieve a perfect .000 light in eliminations. Ellis will receive a write up in Fastlane magazine for his efforts.

The Perfect Package Award, presented to the Sportsman racer who achieves a perfect light while hitting their dial in unfortunately did not go off on this occasion but we look forward to seeing who can win this elusive award during the 2015/16 season.

Congratulations to all of the recipients on a great effort throughout the Fuchs Winternationals and the 2015 Championship season.