It ain’t over til it’s over for Steven Ham

It ain’t over til it’s over for Steven Ham 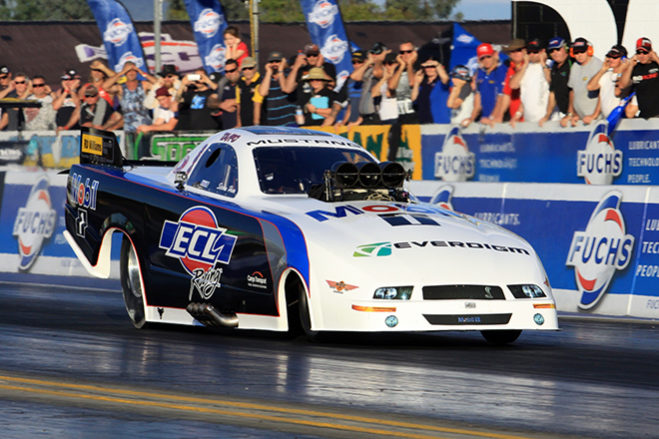 Should the unthinkable happen and Gary Phillips is eliminated in Top Alcohol Round 1 at the Australian Nationals, Steve Ham could be the lucky beneficiary to snatch a Championship from the jaws of defeat.…

Should the unthinkable happen and Gary Phillips is eliminated in Top Alcohol Round 1 at the Australian Nationals, Steve Ham could be the lucky beneficiary to snatch a Championship from the jaws of defeat.

The ultra consistent Phillips is on the verge of a record 17th Australian Top Alcohol Championship, his seventh in a row, and 18th overall with a single Top Doorslammer title also creaking the shelves in his trophy case.

But although his closest challenger, Steve Ham, is 61 points behind in the race for the Championship, he is not giving up hope of an upset especially considering a spin or a rattle of the tyres can mean make or break depending on which lane it occurs.

“We do have a shot and I think we can take it to him,” said Ham. “We need Gary to lose first round, if we want to win, which is no easy feat.

“We will test for two days prior to the Nationals, so hopefully we can have a fast consistent car.

“Mentally is how he loses, and or not keeping up with the track conditions because he sits out some of the qualifiers.”

Besides the title, Ham is going to Sydney to win one of the most prestigious events on the Australian Drag Racing calendar having come so close to being victorious in the past.

“The Nationals is a huge event and now obviously the finals so this meeting now means make or break.

“We have been runner up twice so it seems we are the bridesmaids and need to get this monkey off our backs.

“This will be the first year my daughter comes and watches us in Sydney so it will be a full family affair.

“There is a good line up of cars entered in Top Alcohol and anyone could take this out as they have done in previous years.”