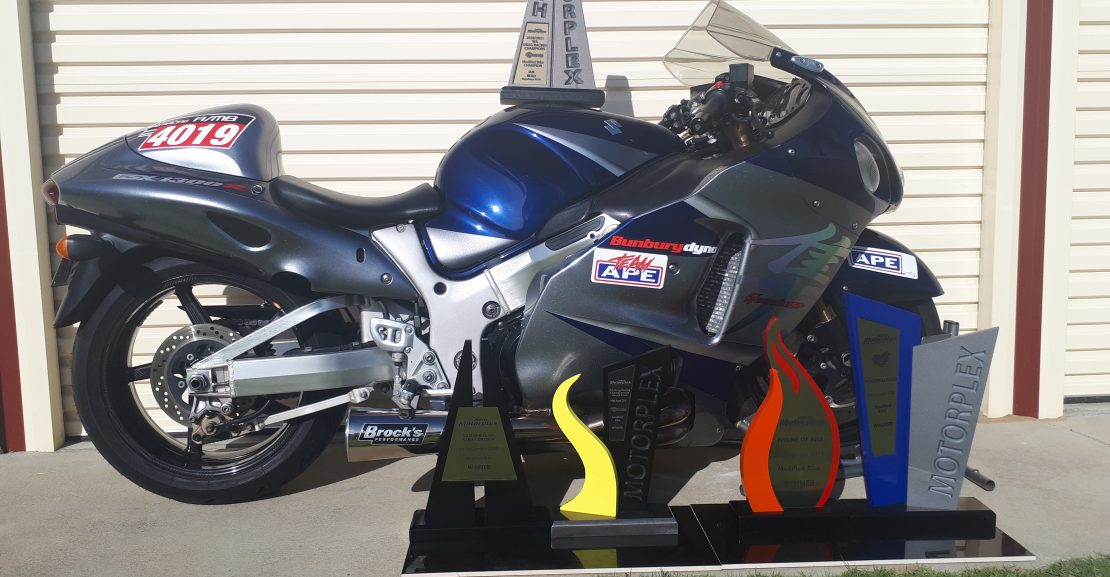 Reigning WA Modified Bike Champion Ian Read is currently preparing to mount his title defense as the countdown continues to the start of the new WA Drag Racing Title season at the Goldenstates across November 26-27.

Read and his Rev It 13 Racing team – who took out the 2015 Summit Racing Equipment Sportsman Series national Modified Bike championship in 2015 – triumphed in a hugely competitive Modified Bike battle to claim the WA Drag Racing title for the bracket earlier this year.

An account manager in the fast-paced auction industry, Read has been racing for more than 10 years and will be doing all he can to ensure that he can claim back-to-back titles aboard his 2006 Suzuki Hayabusa once the new season gets underway.

“We will certainly be going after back-to-back WA titles this season – it has been over 10 years since this was achieved in this hard fought class and we are excited to give it a try,” Read said.

“Modified Bike is a very competitive bracket of dial your own racing, the entry numbers are always very healthy in the West with 35 racers this season and there is a wide variety from street bikes and stretched bikes to wheelie barred bikes – it is not all about who is the fastest, but more so who is the most consistent, which is something I really enjoy.

“I enjoy the challenge of testing myself at the Perth Motorplex whenever I can and when time and logistics permit, you will also find me at national events around the country flying the WA flag.”

Read’s successful 2020/2021 title bid followed a meticulous rebuild on his bike during the 2020 Winter.

“Mark Lange rebuilt the bike for us and is very well known amongst Hayabusa owners,” Read explained.

“With some nice engine parts from APE Race Parts in the USA, we were able increase the engine size from 1300cc to a very competitive 1441cc.

“The bike has a conservative dyno tune from Todd Patterson at Bunbury Dyno and runs on VP109 Race fuel, punching out a respectable 9.487 at 154.49 mph or 248.54kmh at the WA Grand Final – given I am not really a lightweight these days, I am very pleased with this ET,” Read laughed.

“Another highlight was at the Power Palooza pre-season opener when the bike performed straight off the trailer, with a win at that event that continued into the season opener.

“The first round of eliminations at most events usually sees me up against a wheelie barred bike and over the season I recorded a couple of early exits by a narrow margin, but that is racing. I think it makes you strive to be a better racer, and this is why very few street-based bikes have won a Modified Bike State Title at the Perth Motorplex.”

At the WA Grand Finals as many as seven racers still had a chance of securing the WA Title, but everything came together for Ian in the final race of the season with a very close win over his nearest rival.

“It was a very strong season for us which saw us come away with a win each time we made the final of an event.

“In winning the elusive WA state title we are now in rare company as a street bike which has secured a Modified Bike State Title and National Title (2015).

“I’ve been fortunate enough to have a few highlights over the years including this very satisfying result in the WA title.

“The one that stands out for me the most though would be when on my return to racing for the 2014/2015 Summit Racing Equipment Sportsman Series after a major road accident in 2011, I was able to secure the ANDRA National Championship for Modified Bike.

“As we prepare for the new season, I would like to thank Mark Lange and James for working on the bike throughout the season and Cherie for performing race day crew chief duties.

“I would also like to thank the rest of my crew members and supporters for their help and encouragement throughout the season on and off the track, as well as my sponsors APE Race Parts, Bunbury Dyno, Tyres for Bikes Victoria Park, Quick Lap Performance, MWR Racing Filters and Stanley Tools.”