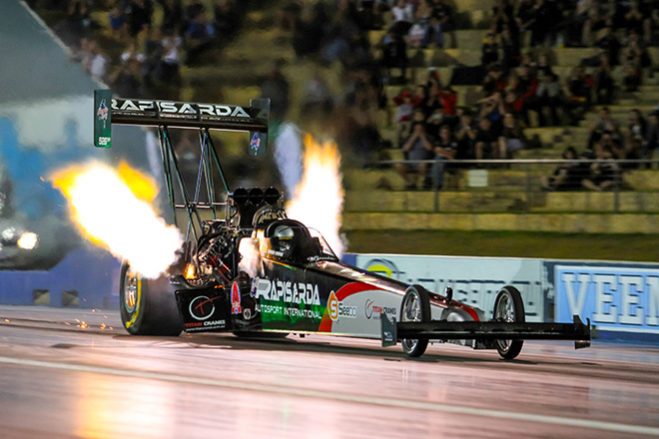 Damien Harris made it two championship round wins from as many nights at Perth Motorplex, backing up for a second victory at Washpod Nitro Max.…

Damien Harris made it two championship round wins from as many nights at Perth Motorplex, backing up for a second victory at Washpod Nitro Max.

It was a case of de ja vu for the final with the Western Australian driver again facing Victorian rival Phil Lamattina for the trophy.

However unlike Saturday’s photo finish, Harris this time took a convincing win with a 4.745 second charge easily accounting for Lamattina, who spun the tyres at quarter track and was unable to recover.

Harris, who said on Saturday he wanted a photocopy of the day, certainly got close enough to a perfect replication.

“It was definitely that photocopy today, except we didn’t have any dramas which was good, I didn’t want that in my photocopy,” he said.

“Unfortunately Phil didn’t get a clean lap, it would have been nice to beat him with him having all eight candles lit, but that’s drag racing.”

Harris qualified fourth with a 4.872 and then earned his place in the final with the quickest time of the night, a 4.614 defeat of Anthony Begley.

“(Crew chief) Santo Rapisarda Jnr wanted to experiment with a few things and we knew we had to get after it to make the final,” he said. “Everything lined up and it stuck, even though it pushed a spark plug out at some point and dropped a hole (cylinder) or two.”

Harris leaves Perth with the points lead, though with Lamattina earning his share of bonus points across the event the gap between the two is minimal.

With the event serving as a memorial to Louie Rapisarda, Harris is keen for the team to repeat its form.

“I am looking forward to following up what we have done this weekend,” he said.

“It’s a single day event and will be really hard, you have to come out of the trailer and qualify well and not have any car issues. One little car issue and you are done and we can get leapfrogged in the championship.” 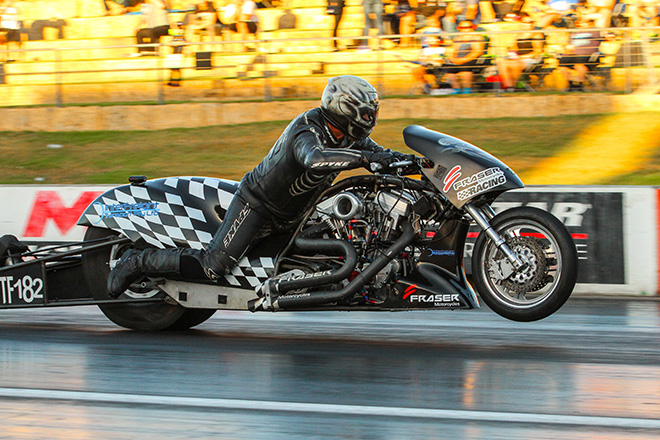 Anything but a repeat was the third round of the ANDRA Top Fuel Motorcycle Championship, with Chris Porter breaking through for a victory.

Porter’s run of recent mechanical woes may have made for spectacular photographs and television footage, but it has been a testing time for him mentally, never knowing if there will be a nitro explosion when he twists the throttle.

The problem was traced back to the cylinder heads the team was using.

“You try laying over it when you know the last time it exploded,” Porter said. “And it does it again and again. I was hesitant on the throttle waiting for it to bang.

“At the last meeting we did two good passes and then it let go again, and it crushed me. It destroyed our whole budget for the year basically.

“But it’s back to what it used to be now, I can get on it and know it will go straight and be under power.”

Porter qualified second with a 7.587, but stepped up big time in eliminations when he carded a 6.765 pass to defeat Les Holden and earn his finals spot.

The surprise of the night was Saturday winner Mark Drew not reaching the A Final after he crossed the centre line during his elimination round pass. Drew was at least able to salvage a B Final win and keep his championship hunt alive.

Top Fuel Motorcycle’s next championship round will be at Sydney Dragway’s Nitro Champs on May 2-3.