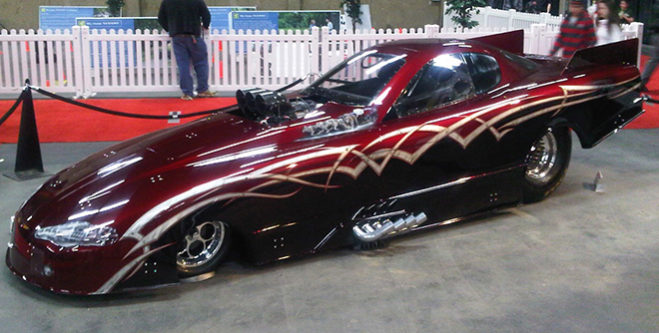 “It all started after we were going to race selected rounds here and have a holiday in the USA. After seeing John Evanchuk’s package for sale, a few ideas were thrown around. I got in touch with one of our suppliers Ken at Motorsports Unlimited about how to base the car etc, and Ken was so keen to help, that now we have struck a partnership in the race operation.”

“Ken is fantastic and we feel very comfortable knowing he can help us with all the unknowns that come with being in another country. We’ve purchased the whole deal from Canadian John Evanchuck in Edmonton, Alberta. The car is a really nice Hadman with a Monte Carlo body in which John won an NHRA event in Seattle in 2012, plus pretty much the whole transporter and inventory and of course the golf cart!”

Ham is entering into the deal one step at a time, beginning his American campaign in bite sizes.

“We’ll leave Australia mid-June to prepare the car in time for the first of three full NHRA meetings at Norwalk on July 2 and then Chicago the next week, and then we go onto Columbus a fortnight later as part of the North-Central NHRA Division series as well.

“We’re not going over with any stars in our eyes, but really just want to start by ticking off a massive bucket list item and get to see the country a little at the same time. We’ll do some testing as well which we’re really looking forward to.

“All the boys are very keen but it’s a big deal to take a few months off work just to go racing, so we’re making it as easy as possible for them to come, but not applying any pressure. Ideally we’d love to have them all over but that may not be feasible for some of them. James (Rowland) is the most likely starter, as he will have finished his studies, as well as the reality that we have a great driver/tuner relationship that I think is one of the main reasons behind this year’s success.”

Ham conceded that it had been a tough decision to sacrifice his Australian Top Alcohol championship defence to head overseas, but he believes that the trip could teach them things that may give them an edge in the future when they return.

“It seems stupid to finally get the Australian championship and then run away but we want to be doing this for a long time and this opportunity is just too good to refuse. It just ticks all the boxes and we’re already very excited. I’ve already got my NHRA license after they gave us the nod based on our Australian timing cards and all the other requirements like medicals and the like, so we’re already counting down the days.”