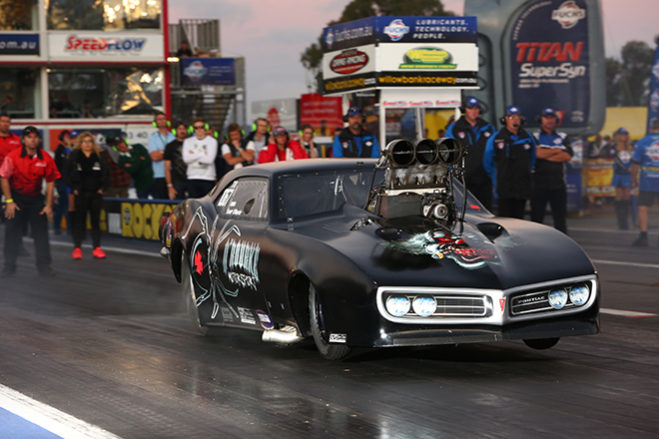 Grant O’Rourke has set down personal best results for both elapsed time and mile per hour during the largest championship drag racing event held outside of North America – the Fuchs Winternationals – at Willowbank Raceway at the weekend.…

Grant O’Rourke has set down personal best results for both elapsed time and mile per hour during the largest championship drag racing event held outside of North America – the Fuchs Winternationals – at Willowbank Raceway at the weekend.

O’Rourke was representing both himself and wife Debbie O’Rourke at the season finale event, with his ‘better half’ electing to not run the event earlier in the week so that all team resources could be thrown behind the one entry following a testing few months for the ex-pat West Aussies.

Earlier in the year, the now Brisbane-based team suffered a substantial robbery following an event in Perth, and then just the week before the Fuchs Winternationals Grant O’Rourke was involved in a head-on accident when another driver crossed into his lane in Darwin.

Once the team decided to run just one entry at the weekend, a coin toss decided which of the husband and wife team would race, with Grant O’Rourke making the most of the opportunity to go quicker and faster than he ever has before with a 5.881 second pass at 246.53 miles per hour (394.45km/h) in the second round of qualifying.

That effort saw him qualified 2nd from a field of 18 to face Paul Cannuli in round one of eliminations come race day Sunday.

“We arrived at the event with a new injector hat, Noonan heads, a fuel system, and a plan of attack,” said Grant O’Rourke.

“On Friday we ran a half-track pass as planned to collect some data, which allowed us to come out the next day and run the personal bests.

“When it came to the third round of qualifying the car ran well to the half-track distance and was looking good for another ‘5.80’ effort but in the second half of the track the car started to move around a bit and saw us take out a couple of timing blocks, causing damage to the front of the car for a late night repair job.

“With the engine and so on still in good shape the team worked hard to fix the body damage and conduct the usual post-qualifying maintenance, while continuing work we have been doing on the four-link rear end to make the car react quicker.

“Unfortunately, when it came to racing I ‘red lit’ (jumped the start) by a very small margin of -.021 seconds, so it has become apparent that I need to adapt my launches to suit the changes we are making.

“All in all it was a positive weekend at the track and I want to thank Debbie for throwing all of her support behind me, as well as the team for their never ending commitment and hard work.”

The weekend’s results see Grant O’Rourke leave the event 4th in the national Top Doorslammer champion after having entered the weekend in fifth, while Debbie has finished 7th in the Top Alcohol championship after not competing in the event.

“Both Grant and I send our congratulations to John Zappia on becoming the eight-time champion – that is no small effort and one that is well deserved. We also have been very pleased to see Ben Bray back on-track in the Doorslammer category and charging through to the final in his very first event back since his accident,” said Debbie O’Rourke.

“Our well wishes also go to Gary Phillips, who became a 17-time national Top Alcohol champion on the weekend despite his dramatic accident during Friday’s qualifying.

“Our thoughts and prayers also go to Phil Lamattina and his family,” said the O’Rourkes, referring to Top Fuel racer Phil Lamattina’s horrifying accident on Saturday which has made headlines around the country.”

Next up for O’Rourke Motorsport is the season opener for the 2015/2016 ANDRA Drag Racing Series – scheduled for just four weeks’ time in Darwin (NT) – with both Top Doorslammer and Top Alcohol racers set to hit-the track.

O’Rourke Motorsport will be working towards running both cars in the season opener.