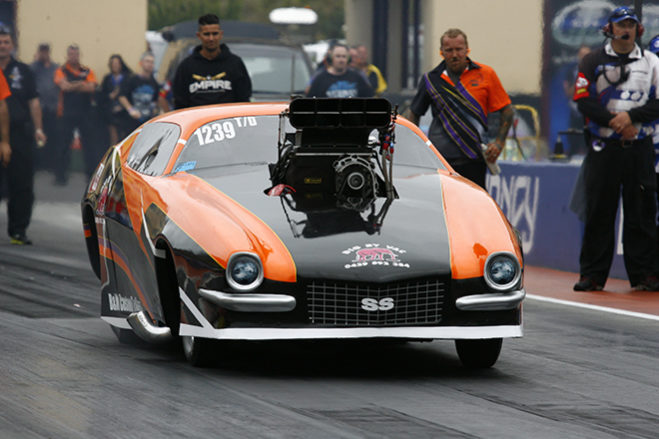 The ANDRA Championship Central Swing to open the 2016/2017 season will feature a bumper field of Top Doorslammers on back-to-back weekends in Darwin and Alice Springs.…

The ANDRA Championship Central Swing to open the 2016/2017 season will feature a bumper field of Top Doorslammers on back-to-back weekends in Darwin and Alice Springs.

Bill Goonan is the latest driver to throw his hat in the ring in pursuit of ANDRA Championship glory at both Nitro Up North (July 8-9) and the Desert Nationals (July 16-17).

The past 12 months has seen the B&M Motorsports Top Doorslammer work through come clutch issues with a new set up but Goonan says there is light at the end of the tunnel as he looks to make mark on his first ever visit to the Territory.

“The team is really looking forward to Darwin an Alice Springs as we’ve never visited theses places or raced there,” said Goonan.

“Coming out of the Winter Warm Ups we rolled a sprag at the top of first gear and the engine went to 12800 which caused four dropped intakes and three exhaust as well plus punched holes in four pistons and stretched a brand new, two run old BME rods.

“Well we bounced back with some great people behind us helping us out including Scott Maclean, Mark Brew, Grant O’Rourke, Noonan Engineering, Aaron Deery and an awesome crew who put in massive all nighters to get us to the Winternationals.”

As they say the only way is up for Goonan and his team has managed to capture some valuable data ahead of two events where the track conditions at both Hidden Valley and Alice Springs Inland Dragway are always first class.

“We are so, so close going by the Racepak info. We’ve been struggling with a new clutch set up last 12 months but finally seeing the light at the end of the tunnel, with a .892 60 foot time against O’Rourke in the first round at Willowbank last month.

“So I’ve got the my mojo back in the car and the boys better look out as we’re coming to hurt some people’s feelings at Darwin an Alice Springs!

“We’ll see all you Territorians real soon, we are pumped to the hills.”