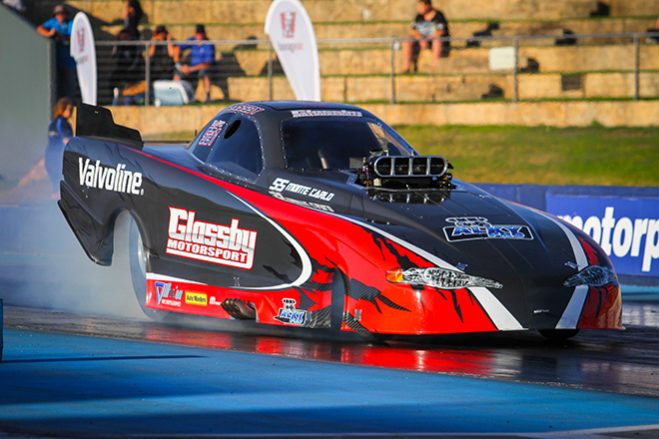 Perth based Top Alcohol Funny Car racer Craig Glassby will enter this weekend’s Westernationals with fresh confidence after opening his 2015 campaign with a landmark 5.46 second pass at the Perth Motorplex, on the way to winning the Nitro Slam event on January 9.…

Perth based Top Alcohol Funny Car racer Craig Glassby will enter this weekend’s Westernationals with fresh confidence after opening his 2015 campaign with a landmark 5.46 second pass at the Perth Motorplex, on the way to winning the Nitro Slam event on January 9.

Glassby’s Alky Pro/Valvoline Monte Carlo registered a stunning 5.469 to equal Gary Phillips’ Motorplex Track Record, and was within four hundredths off Phillips’ national record after only a handful of passes.

“This is a new engine combo with Noonan heads and manifold, and I could tell from day one it was making a heap of power, but we were still surprised to get into the 5.40s so quickly. The tune up is still pretty soft and the data tells us that there’s plenty to go,” Glassby said.

However, the dream-driven racer was quick to throw the accolades in the direction of his hard working crew, especially long-time friend and tuner, Greg Gower.

“Greg and I have been mates for probably 35 years. We teamed together on the Allan Dobson Castrol Funny Car that was the first Alcohol FC to go five seconds in Australia back in 1993, and Greg was crew chief for a Doorslammer national championship as well. We have a lot of history and that makes for a great relationship between the driver and crew chief which is worth everything.”

“Greg has spent the last two years designing and building a Fuel Injection Flow Bench, and developing a tuning program for blown alcohol cars, called Alky Pro. The Alky Pro program takes advantage of new technology to tune these cars more accurately than we’ve been able to before, and it was the key to us zeroing in on the tune-up almost instantly.”

Glassby is a perennial petrol-head who’s attracted the nickname “Hollywood,” but he takes great pride in creating many of the components on his race car himself, including chassis work, engine and gearbox development, clutch maintenance, and even the mounting of the Monte Carlo body completed in his own workshop. In addition, the car features several unique parts, which have been built in-house from Gower’s designs and won’t be seen elsewhere.

“Greg is an awesome designer, and I take his stuff and build it. We really want this car and its success to be as Australian as possible, so part of the challenge for us is to develop our own ideas and parts” said Glassby.

That said, the team has recently called on the services of Mike Janis as a consultant.

“I was fortunate enough to meet Mike and Mike Jr. at Indianapolis late last year, and I asked if they’d be interested in being a contact to help keep us up to date with anything new happening in alcohol racing. It sometimes takes a while for new technology to filter down to us and Mike has a wealth of experience and has been great to deal with. He looked over some of our data and made some helpful suggestions, and we’re excited to have them on-board.”

Glassby will be on track again for the prestigious Westernationals at the Perth Motorplex on January 30 and 31, hoping to swing the bat at some of the interstate competition following their recent success, but with only a few passes under their belts, they acknowledge they don’t have a full handle on this combination just yet.

“We have the greatest respect for our opposition, and the legends of the sport, both here and Internationally, and we don’t compare ourselves to racers like Manzo and Harker as our rules aren’t the same. In Australia, Dragsters and Funny Cars run against each other, heads up, so the blower overdrives have been modified by ANDRA to ensure competitiveness.”

For more details on the fuel software used by Glassby Motorsport, visit www.alkypro.com